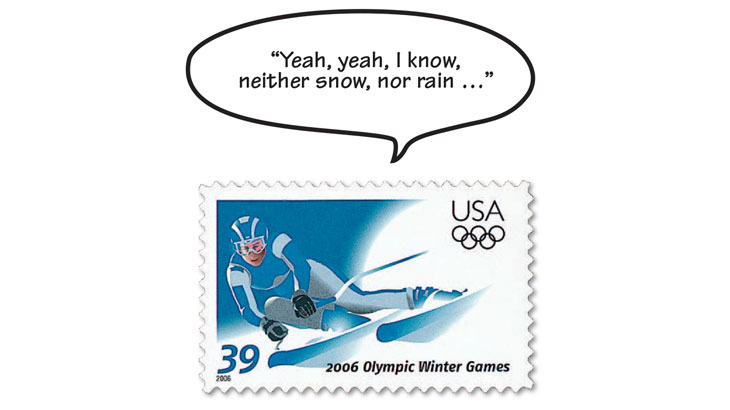 The February cartoon caption contest featured the 2006 39¢ Winter Olympics stamp picturing a skier. The winner of the philatelic part of the contest, David Schwartz of Commack, N.Y., converted the Olympic skier to a letter carrier. The next cartoon captio

The proximity of North Korea to the site of the recent Olympic Games in PyeongChang, South Korea, was the most popular theme used by Linn’s readers entering the February cartoon caption contest. The contest featured the 2006 39¢ Winter Olympics commemorative showing a skier (Scott 3995).

Gerald Boren of Mesa, Ariz., has the skier saying, “Hey, how come this ski trail is downhill to North Korea?”

In the entry from John Brady of Clementon, N.J., the skier is looking to avoid problems with “See ya later ‘Rocket Man’; I’m heading south as fast as I can go!”

And speaking of avoiding threats, Joe Timko of Vicksburg, Mich., has a more immediate problem for our skier to consider, “Polar bears aren’t vanishing — there’s one coming up behind me!”

Linn’s readers took several digs at the United States Postal Service which has declined to follow the lead of other countries that honor their Olympic Gold medal winners on stamps.

Nicholas Rushefsky of Silver Spring, Md., has the skier complaining, “If I skied for Canada, I’d have my real face and name on this stamp!”

The winner of the philatelic line part of contest casts the skier in the role of a postal delivery person. The entry comes from David Schwartz of Commack, N.Y.

On the nonphilatelic side, Denise Stotts of Houston, Texas, gives the skier the frights with “YIKES! I thought this was the Bunny Hill!”

“I’ve got to make up 11¢ on this run or I’ll never make first class” from Arthur Cole of Huntsville, Ala.

“If I signed an endorsement for ski fasteners, would that be a binding contract?” by Steve Kotler of San Francisco, Calif.

“Posing for this picture was no easy task. My back is killing me!” by Lawrence Segel of White Plains, N.Y.

“Um, has anyone tested this white powder? I heard that this snowstorm originated in Russia,” from Bradley Miller of Huntsville, Ala.

“The stock market just passed me going down. I hope it doesn’t hit me coming back up!” by John Hostetter of Lancaster, Pa.

“OK, who’s the idiot who left the ‘39’ on the course?” from Michael Morrissey of Westerville, Ohio.

“I’m COLD. I wonder if they have water skiing in the Summer Games?” by Bob Miller of St. Albans, W.Va.

The next cartoon caption contest will be announced in the April 9 issue of Linn’s.