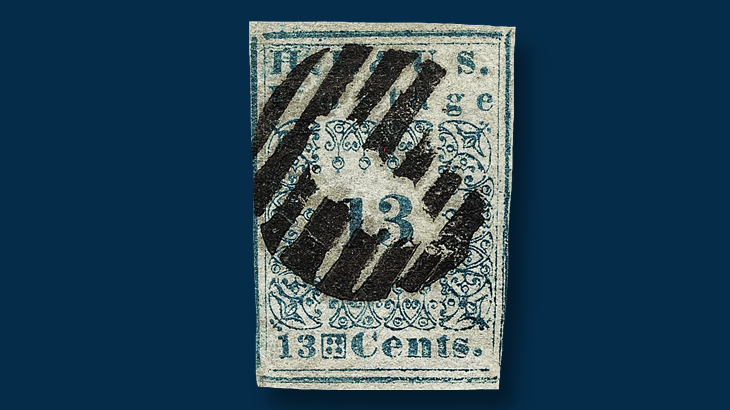 One of three Hawaii Missionary stamps offered during the March 27-28 Siegel auction in New York City. This used 13¢ blue H.I. & U.S. Postage stamp (Scott 4) is described as “essentially sound” with no repairs or restoration. 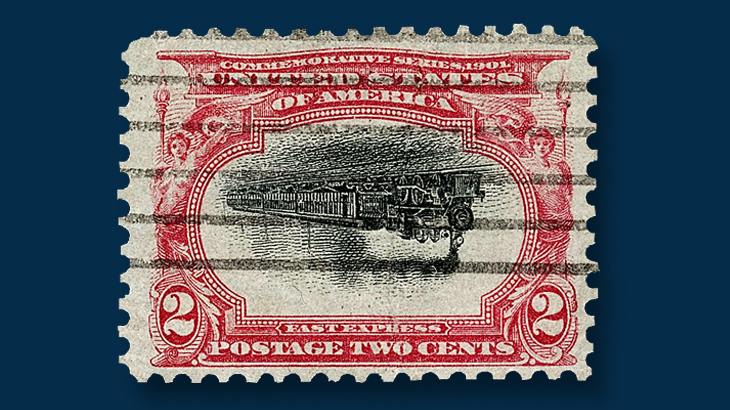 One of only seven known used examples of the 1901 2¢ Pan-American invert will be offered during the March 27-28 auction by Robert A. Siegel Auction Galleries in New York City.
Previous
Next

The sale begins with some 65 lots of U.S. essays, proofs and specimens, with individual items, multiples and sets ranging into the 1902-03 series.

The first session continues with postmasters’ provisionals, stamps of the 1847 issue and later reproductions, and 1851-60 classics.

A rare unused 1857 perforated 5¢ red brown type I Thomas Jefferson stamp with original gum (Scott 28) is offered in this first session; the stamp is described by Siegel as exhibiting deep rich color. The firm reports that in the past 14 years it has sold only five other single examples with original gum, plus a block of four.

The stamp in this sale is accompanied by a 1975 Philatelic Foundation certificate, and listed with the $60,000 value from the 2018 Scott Specialized Catalogue of United States Stamps and Covers. The Scott catalog lists the value in italics, an indicator that the stamp can be difficult to value accurately.

The classic choices continue in the auction’s second session, including 25 lots of stamps from the 1893 Columbian issue (Scott 230-240), and two inverts from the 1901 Pan-American issue: a 1¢ green and black, unused, with slightly disturbed original gum (294a); and a rare used 2¢ carmine and black with a machine cancel (295a).

The 2¢ with center inverted is described as having “few flaws including slight creasing, small tear at bottom and reperfed at top but without repairs.” Only seven used examples are known, Siegel notes, and none are sound.

The Scott catalog value is $55,000 for the used stamp, the same as the unused invert, but Siegel states “in our opinion this is very undercatalogued in Scott,” observing that approximately 64 unused singles are known, compared to only seven used singles.

The final session presents carriers and locals, revenues, including a handsome example of the cherished $500 red orange, green and black second issue “Large Persian Rug” (Scott R133), and other back-of-the-book, including U.S. possessions.

The last of these is described by Siegel as “an exceptionally choice example,” essentially sound with no repairs or restoration. The Scott catalog value for the used stamp is $35,000, again listed in italics.

The auction catalog can be viewed here, with online bidding options available.