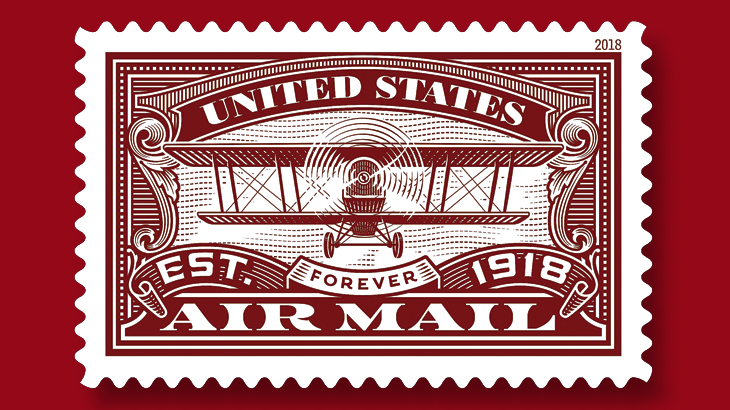 Using the same design as the stamp being issued May 1, the Postal Service will issue a carmine red variety later this summer. The second stamp celebrates the U.S. Post Office Department’s role in the development of airmail service. 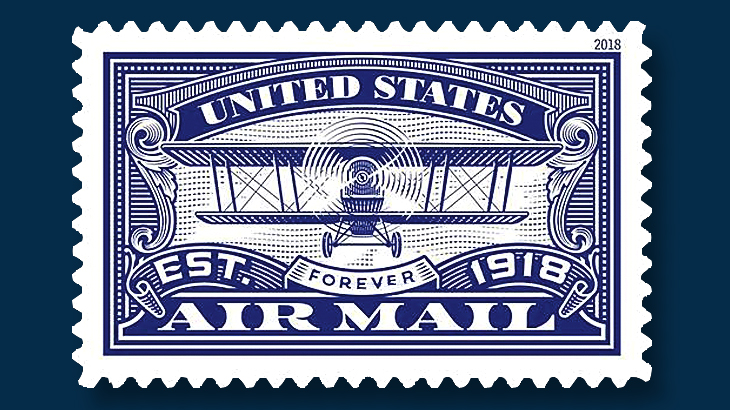 The Curtiss Jenny biplane, used to carry U.S. airmail when service began in 1918, is featured on a new forever stamp to be issued May 1. A carmine red version of the same design will be issued later this summer.
Previous
Next

Two new intaglio-printed forever stamps celebrating the centennial of United States airmail service will be issued on separate dates in 2018.

The horizontal stamps share identical designs but differ in color. A blue stamp will be issued May 1, and a carmine red stamp will have its first-day ceremony “later this summer,” according to the Postal Service.

The stamp design features a Curtiss JN-4H biplane, the U.S. Army airplane that inaugurated the nation’s airmail service in 1918, and which is immortalized in the first three airmail stamps issued that year by the U.S. Post Office Department (Scott C1-C3).

The most famous of these early issues is the 1918 24¢ carmine rose and blue Jenny airmail stamp (Scott C3), itself an intaglio-printed stamp that was discovered on its May 14, 1918, day of issue with the central image inverted, an error known today as the famous Jenny Invert (C3a).

On the new stamps, the plane is shown in flight from the front with its single propeller turning. “United States” is lettered in a curved tablet above the plane illustration, and “Air Mail” is inscribed along the bottom edge. Centered directly below the plane is “Forever,” flanked at left and right with “Est.” (for Established) and “1918.”

Elements of the design are reminiscent of the airmail stamps from 100 years ago, which were designed by Clair Aubrey Huston of the U.S. Bureau of Engraving and Printing.

The nondenominated (50¢) blue version of this new design will be issued May 1 with an 11 a.m. first-day ceremony at the Smithsonian National Postal Museum in Washington, D.C.

“On May 15, 1918, in the midst of World War I, a small group of Army pilots delivered mail along a route that linked Washington, Philadelphia, and New York — initiating the world’s first regularly scheduled airmail service,” the Postal Service said in its announcement of the new stamps.

The carmine red variety of the stamp specifically commemorates when the U.S. Post Office Department assumed control of airmail service, according to the Postal Service.

Intaglio-printed stamps for many years reproduced designs that were line-engraved by hand. Though not confirmed by the Postal Service, the design of this image appears to be mechanically reproduced, perhaps from an original design created digitally. In its release information, the Postal Service did not issue credit for a design engraver.