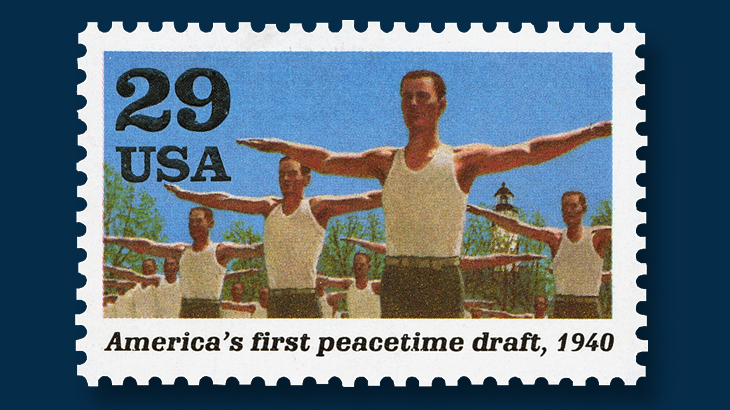 The cartoon caption contest stamp for April is the 1991 29¢ stamp highlighting the importance of the peacetime draft imposed in 1940 in preparation for the possible U.S. involvement in the European war. The stamp is part of a series commemorating World Wa

“America’s first peacetime draft” is inscribed on a 29¢ stamp issued Sept. 3, 1991 (Scott 2559b), in a pane of 10 stamps with different designs, part of a series marking the 50th anniversary of World War II.

Mandatory PT (physical training) was an essential part of basic training, but the way the new soldiers are dressed in the design of the stamp might give “draft” a dual meaning.

The Selective Training and Service Act was signed by President Franklin Roosevelt on Sept. 16, 1940. Its purpose was to rebuild the U.S. military from its low point of about 334,000 (Army, Navy and Marines) in 1939 to be ready for war, which many believed the United States would become involved in. Approximately 4.7 million men and women served in World War I, so it was clear that the peacetime military was not going to be sufficient for the looming conflict.

Under the Act, 49 million men registered and 10 million were inducted. Ultimately, 16 million men and women served in the U.S. Armed Forces during WWII.

So, put yourself in a T-shirt, think calisthenics, and tell me what you might be saying or feeling about your lot in life at that moment; the politics of the war which had already begun in Europe; or break out of that era to comment on events today, sports, stamp collecting, or whatever else occurs to you.

Put your entry (or entries) on a postcard if possible and send it to me, John Hotchner, Cartoon Contest, Box 1125, Falls Church, VA 22041-0125, or email it to jmhstamp@
verizon.net. If you send an email, it is essential that your include your postal mailing address.

To be considered for the prizes, entries must reach me no later than April 27.

Have any thoughts on the hot air balloon experience? Express them for November's Caption Contest