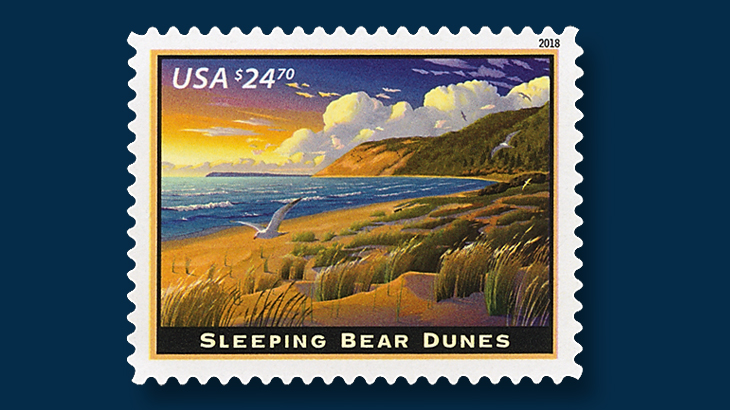 Among the small number of United States stamps to receive Scott catalog numbers this month is the $24.70 Sleeping Bear Dunes stamp for Express Mail parcels.

It’s time to reveal a new round of Scott catalog numbers.

The new Scott numbers detailed here are for recently issued U.S. stamps and postal stationery. New Scott numbers for worldwide stamps are given in the Scott New Listings Update in the expanded monthly issue of Linn's Stamp News.

One of the highlights in this group is Scott 5258, newly assigned to the $24.70 Sleeping Bear Dunes, which is the U.S. postage stamp with the highest face value issued to date. The stamp satisfies the flat rate for domestic Express Mail parcels.

Now that you have some context, here is your batch of new U.S. Scott numbers:

All of the numbers appear in the Catalogue Update section of the March 19, 2018, issue of Linn’s Stamp News. For further information contact Scott catalog senior editor for new issues Martin J. Frankevicz.