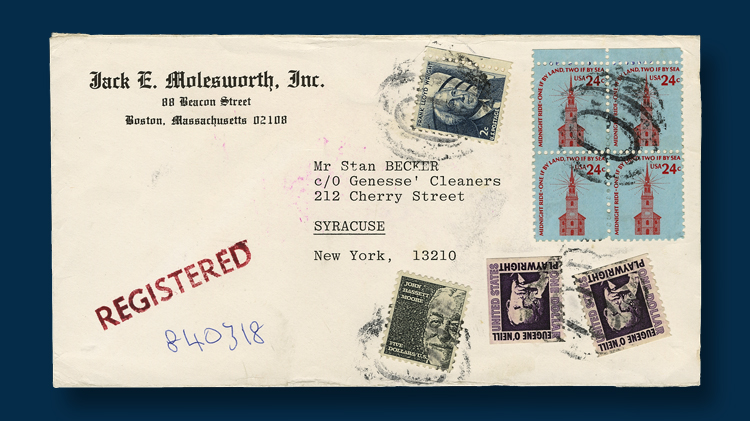 Stamp dealer Jack Molesworth (1925-2007) mailed this registered cover in 1978 from his store in Boston to Syracuse, N.Y. The cover is franked with $7.98 in postage, including a two $1 Eugene O’Neill stamps and a single $5 John Bassett Moore stamp.

Purists in the world of postal history sometimes look down their noses at covers from stamp dealers, dismissing them because the stamps affixed don’t represent a “commercial” use.

Fair enough, but such covers are starting to capture more attention from collectors.

Consider this registered cover, which Jack Molesworth (1925-2007) sent in June 1978 from Boston to Syracuse, N.Y. Backstamps (not shown) indicate the cover took two days to reach its destination.

Given the rather robust indemnity, it is tantalizing to ruminate a bit about what the envelope once contained.

An esteemed expert on and student of Confederate States philately, Molesworth ran a brisk business from his Beacon Street store in Boston. Covers such as this — bearing his distinctive “Jack E. Molesworth, Inc.” corner card (return address) — are not hard to find.

This cover sold online in mid-April for a modest $16, attracting 11 bids from seven bidders.

A similar philatelic registered cover from dealer Lowell Donald in Vermont, also franked with a $5 Moore stamp and mailed in 1979, sold online around the same time for about $50.

Why the big difference in price? The answer likely lies in how the two sellers described the covers.

For the Molesworth cover, no mention was made either of the $5 Moore stamp or its Scott number in the description.

Savvy seller No. 2 began the description of the Lowell Donald cover with, “$5 Moore #1295” and included the word “registered.” Not one of these important cues was used to tout the Molesworth cover.

All of which means the buyer of the Molesworth cover picked up a nice bargain.

By the way, there is another, more subtle reason why I liked this cover when I first saw it: I turned 12 June 28, 1978, the day it arrived in Syracuse.