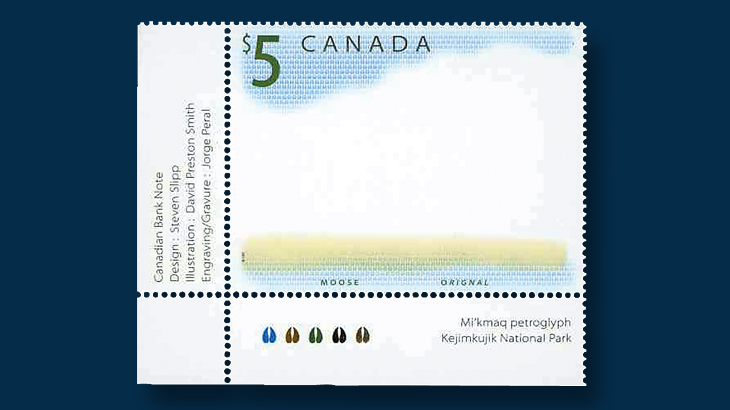 The intaglio printing normally found on Canada’s 2003 $5 Moose stamp — which includes the moose — is omitted from this corner margin example in the upcoming Eastern auction. 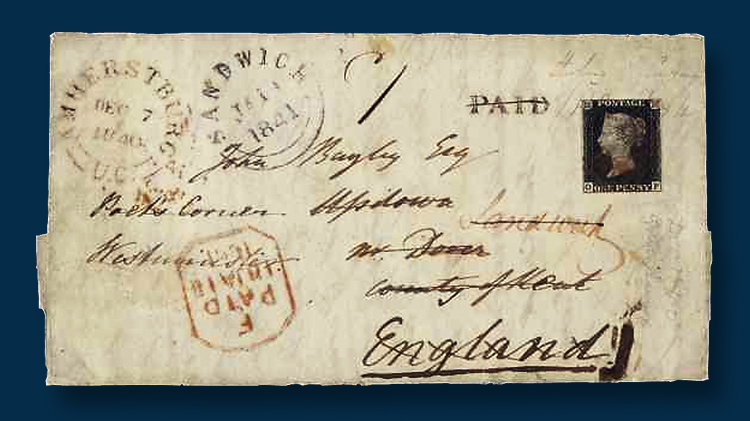 An 1840 folded letter sheet franked with Great Britain’s Penny Black is described as the first letter originating from Canada bearing a postage stamp. It is offered by Eastern Auctions in its June 8-9 sale.
Previous
Next

The June 8-9 general sale from Eastern Auctions begins with a selection of worldwide material and continues with British North America, Canada’s pence and cents issues, Canadian postal history from the pence era to the Admirals, plate varieties, registered mail, proofs, plate varieties and more, as well as large lots and collections.

The auction lots can be found online here, or on Stamp Auction Network where bidding ends June 6.

Among the listings for Great Britain material is a folded letter sheet mailed Dec. 7, 1840, and carried by steamer. Eastern describes it as the first letter originating from Canada bearing a postage stamp.

“Fort Malden, Amherstburg Upper Canada December 8, 1840” is handwritten on the letter sheet, according to Eastern, and a Dec. 7 Amherstburg double-arc dispatch postmark is clearly struck at upper left on the front. Originally addressed to Dover, England, the cover shows multiple redirections.

“Mail forwarded to a new address after acceptance was liable to one penny British inland postage, in this case a clear margined example of the 1840 One penny black, Plate 8 [OF] was affixed and cancelled by a red Maltese Cross,” according to the auction catalog description.

The estimate for this postal history item is given as $25,000+ in Canadian dollars, equivalent in U.S. dollars to approximately $19,530 in mid-May.

A handsome 1851 folded lette sheet in this sale, mailed from Montreal to Buffalo, N.Y., is franked with a horizontal strip of four of the 3d orange red Beaver stamp on laid paper (Canada Scott 1) and tied by concentric ring cancels.

The classic British North America and early Canada stamp issues include a vertical mint strip of 10 of the 1857-58 3d red Beaver on medium wove paper (Scott 4). Though it has its faults, the stamp strip is described by Eastern as “without question, the largest existing multiple of the three pence beaver.”

A selection of modern errors includes a lower left corner margin never-hinged mint single of the so-called “Missing Moose” error stamp, the 2003 $5 stamp with all intaglio printing omitted, including the central figure in the vignette, the engraved moose (Scott 1693a).

The two-day auction in Halifax offers some 885 lots altogether.