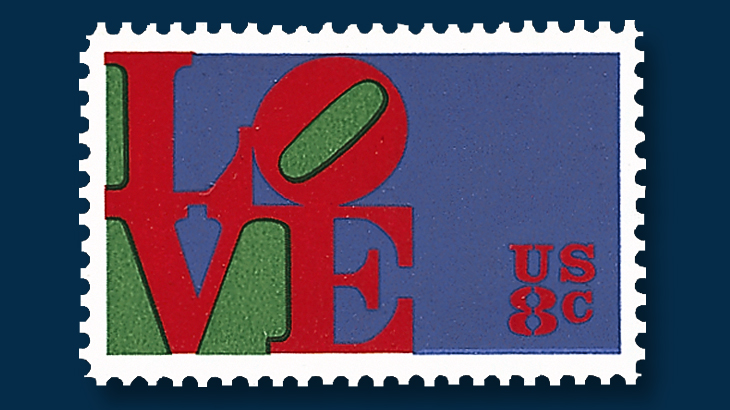 The first United States Love stamp, designed by Robert Indiana, was issued in 1973. Indiana, a prominent artist, died at age 89 on May 19.

Robert Indiana, who used his own bold text-based artwork to design the first United States Love stamp in 1973, died May 19 at his home in Maine. He was 89.

Born Robert Clark on Sept. 13, 1928, Mr. Indiana was already a successful pop artist when he designed the 8¢ stamp based on his own block arrangement of the word “LOVE.”

He developed his design — with “LO” at the top, “VE” at the bottom and the letter “O” tilted to the right — in the 1960s. In 1970 he used the same design to create a 12-foot by 12-foot sculpture out of Cor-ten steel, an alloy designed to take on a weathered appearance with exposure to the elements.

The original sculpture recently underwent structural repairs and is displayed in the collection of the Indianapolis Museum of Art, as is an oil-on-canvas painting of the Love design Indiana completed in 1966.

The painting appears to be identical to the arrangement on the left side of the 8¢ Love stamp (Scott 1475), which was issued Jan. 26, 1973, in Philadelphia, Pa.

Other versions of the sculpture have been created and displayed over the years, including one near the corner of 55th Street and Sixth Avenue in New York City.

In its 1973 news release about the new stamp, the Postal Service described Mr. Indiana as a renowned modern pop art painter and sculpturist known for his other works celebrating the theme of love.

Most news reports of Mr. Indiana’s passing have included references to his involvement in designing the 8¢ stamp.

Brandon Griggs and Carma Hassan reported about the Love design for CNN: “In 1973, the U.S. Postal Service put it on a postage stamp that became so popular more than 300 million stamps were printed.”