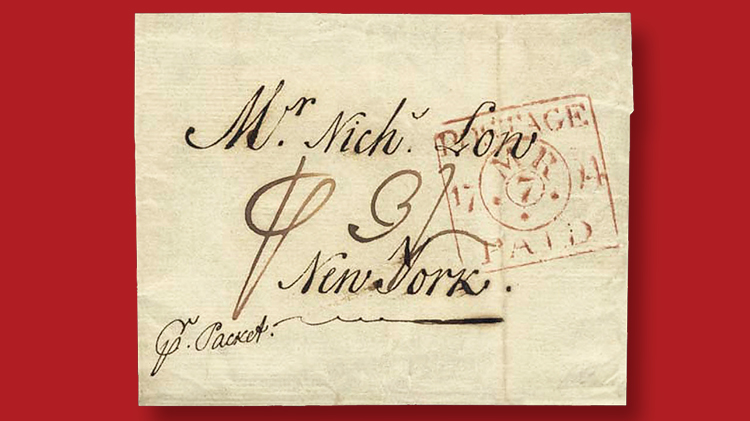 This 1794 letter from London to New York includes a “Postage Paid” datestamp with the full date. It will be part of Alan Holyoake’s presentation on the history of the British postal system June 20 at the Collectors Club in New York. 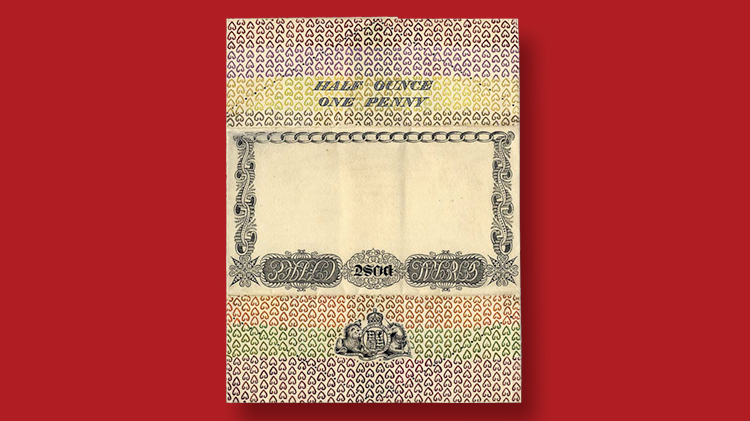 This Great Britain 1-penny letter sheet essay was in the personal effects of a government official for more than 150 years before coming to the public’s attention in 1996.
Previous
Next

Every collector knows the world’s first postage stamp was the Penny Black, issued by Great Britain in 1840. Fewer are familiar with the history of the British post office in the centuries before that, or with the events that transpired to bring the world this humble but revolutionary innovation.

Alan Holyoake, one of Britain’s foremost collectors and philatelic scholars, will present a talk June 20 at the Collectors Club in New York on the history of the British postal system, from its inception back in 1635 right up to the issuance of its famous first stamp. The talk is called “The British Post Office Inception though First use of Postage Stamp.”

Holyoake, who signed the Roll of Distinguished Philatelists in 2017, the hobby’s highest honor, has published books on the development of Britain’s first stamps and on the history of registered or secured mail going back to the 15th century.

He has co-authored a volume on the genesis of Britain’s first postal stationery, the short-lived envelopes illustrated by William Mulready, which were also issued in 1840.

The 88-page book that Holyoake has prepared to accompany his lecture at the Collectors Club contains a plethora of examples illustrating the developments and various twists and turns on the way to providing cheap, universal access to a postal network that ultimately covered the British Isles and reached across the seas.

From early broadsides announcing new postal services to folded letters bearing manuscript markings and experimental handstamps, right up to seldom-seen essays for the new stamped envelopes and adhesives, Holyoake’s presentation covers the more than two centuries preceding the appearance of the Penny Black with authority and expertise.

Among the standout items Holyoake will show are a 1653 letter sent from Deal Castle on the Kent coast to Gen. Oliver Cromwell. The letter is endorsed by hand, “Haste Haste Haste, Post Haste with Speed,” indicating its courier was not to dawdle.

A 1794 letter to New York shows a rare, short-lived postmark that includes the words “Postage Paid” and the full date, something that would not become standard until many decades later.

A brightly colored essay for a prepaid envelope appeared on the philatelic market in the 1990s, after hiding in the personal effects of a government official for a century and a half.

Another highlight is a Mulready envelope uprated to 2 pence with the addition of a Penny Black and postmarked May 6, 1840, the stamp’s first day of use.

Holyoake lives in Jersey in the Channel Islands.

The Collectors Club is located at 22 E. 35th Street in Manhattan. More details can be found on the club’s website. Also, after the presentation, a video of the full lecture will be posted on the website.