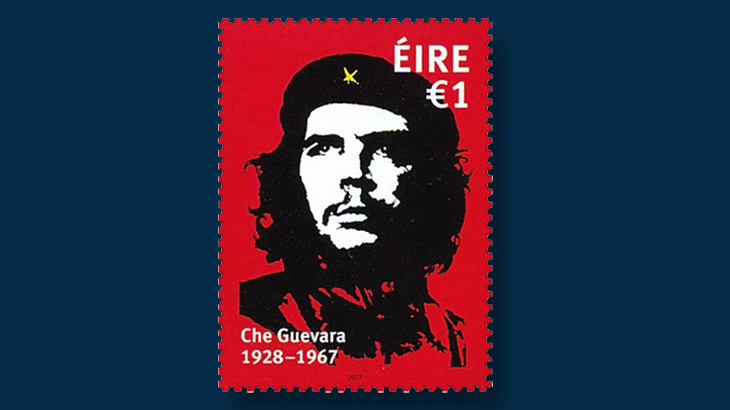 The 2017 Che Guevera stamp was voted as Ireland’s “stamp issue of the year.”

Ireland’s controversial Che Guevara stamp has been voted “stamp issue of the year” by readers of An Post’s new-issue bulletin Irish Stamps, The Collector.

The popularity poll for best stamp of 2017 was announced in the first 2018 issue of the bulletin, and the results were reported in the second.

In the latter bulletin, An Post said that one of the reasons that collectors chose the Che Guevara stamp was “Art is about creating conversation and debate. And this stamp certainly succeeded.”

The £1 commemorative (Scott 2165) shows the familiar red and black poster image of Guevara created by Irish artist Jim Fitzpatrick. The poster is based on a photograph taken by Cuban photographer Alberto Korda.

The stamp was issued Oct. 5, 2017, to mark the 50th anniversary of Guevara’s death (1928-1967). In a news release about the stamp, An Post said: “A famous revolutionary of Irish descent and the artwork by an Irish artist that became one of the world’s great iconic images, all come together in a stamp which has just been issued by An Post.

“Ernesto ‘Che’ Guevara, the quintessential left-wing revolutionary was killed in South America in 1967. An Post has chosen the 50th anniversary of his death to issue the stamp featuring the famous image of ‘Che’ by Dublin artist Jim Fitzpatrick.”

The news release also said: “He assisted Fidel Castro in overturning the Cuban government in the late 1950s, and then held key political offices during Castro’s regime. Engaged in guerrilla action in Bolivia when he was arrested and subsequently executed by the Bolivian army on October 9, 1967. With his death and assisted by the popular Jim Fitzpatrick artwork, Guevara the Marxist revolutionary, went on to become a cultural icon.”

Criticism of the stamp by some Cuban-Americans, Irish politicians and others was swift, but demand also was high, perhaps in part because of the news coverage.

As of April 24, the stamp is once again listed as “sold out” on An Post’s online shop.