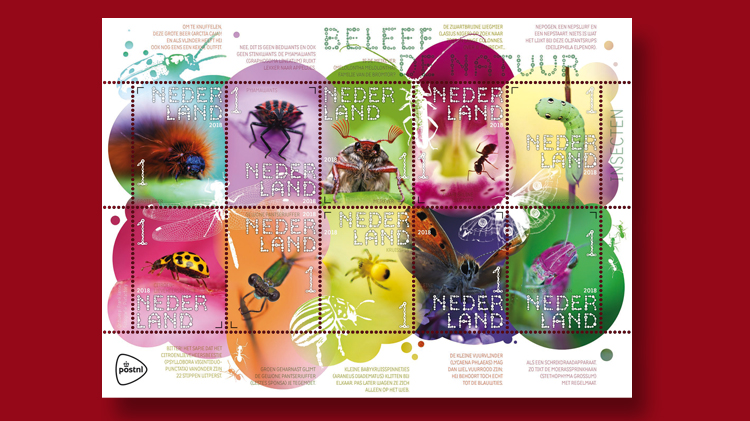 The latest pane of 10 stamps in the Netherlands’ Experience Nature series offers a close-up look at insects. The stamps were issued June 4 and are the third of four panes to be issued in 2018.

The Netherlands will issue a pane of 10 se-tenant (side-by-side) stamps June 4 offering close-ups of insects.

These stamps represent the season of summer in the Netherlands’ Experience Nature series.

The series began Jan. 2 with a pane of 10 depicting reptiles and amphibians (winter). A second pane of 10, issued April 9, features wildflowers (spring). The series will conclude Sept. 17 with a pane of stamps showing mushrooms (autumn).

Frank Janse designed the stamps in the series, using photographs from Pixfactory, which specializes in nature photography.

The Netherlands' PostNL said: “The photographs used are ‘portraits’ of the selected insects in their natural surroundings, often with a shallow depth of field. Most of the photos flow unnoticeably onto the adjacent stamp, suggesting that all insects live in the same habitat side by side, although this is not actually true.”

All the stamps are nondenominated. The “Nederland 1” on each stamp indicates that it pays the basic domestic rate for letters up to 20 grams. Joh. Enschede printed the stamps by offset.