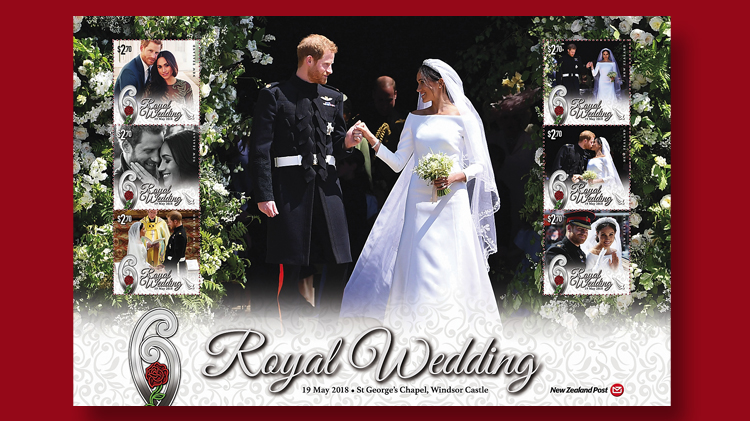 New Zealand Post’s May 21 souvenir sheet celebrates the royal wedding and includes photographs taken during the May 19 wedding of Prince Harry and Meghan Markle.

New Zealand Post is issuing the six stamps May 21.

The six stamps are in a souvenir sheet. The large selvage area depicts the newly married Prince Harry and Meghan Markle as they leave the chapel. Inscribed at the bottom of the sheet is “Royal Wedding” and “19 May 2018 • St. George’s Chapel, Windsor Castle.” A red rose in a silver Maori art koru pattern is shown to the left of the inscription, and “New Zealand Post” to the right.

The stamps are in two vertical strips of three. The first two stamps on the left side of the sheet depict photos that were taken Nov. 27, 2017, the day the couple announced their engagement.

The remaining four stamps show photos from the ceremony and the procession afterward through the streets of Windsor.

Only one person, other than the new Duke and Duchess of Sussex is easily recognizable on the stamps: Archbishop of Canterbury Justin Welby is shown officiating at the wedding ceremony on the bottom stamp on the left.

Each stamp is denominated $2.70, New Zealand Post’s international rate for letters. In addition to a photograph, each stamp also shows the red rose.

Dave Burke designed the stamps and souvenir sheet. The Collectables and Solutions Centre of New Zealand Post printed the issue by offset.

In announcing the stamps, New Zealand Post said: “Featuring four stunning images from the wedding day and two images celebrating the couple’s engagement, this stamp sheet is a splendid reminder of this special day. This highly anticipated event has once again united nations in a celebration steeped in tradition.”

New Zealand Post also said: “As part of the Commonwealth of Nations — and as a country founded on the immigration of British settlers — New Zealand has a proud relationship with the United Kingdom and its royal family. A royal occasion such as this is worth celebrating, and these stamps are the perfect memento of this special day, and make a wonderful collectable.”

New Zealand Post also created four Royal Wedding stamps and a souvenir sheet for Tokelau, and three stamps for Niue. Tokelau is a non-self-governing territory of New Zealand, and Niue is self-governing state in free association with New Zealand.

The stamp designs for Tokelau feature black-and-white photographs framed by a decorative border, described by New Zealand Post as “based on the frangipani and the Pacific fine mat.”

Two of the stamps show scenes from the engagement announcement, and the other two depict photos from the procession after the wedding. The footmen can be seen on one of the stamps; they are behind Prince Harry and Meghan in the Ascot Landaus carriage.

New Zealand Post is issuing the Tokelau and Niue stamps May 21.

No doubt other postal administrations will soon issue stamps depicting scenes from the royal wedding and procession.

Great Britain’s Royal Mail and other postal administrations released stamps on the day of or prior to the wedding (Linn’s, June 4, page 1 for Great Britain, and May 28, page 8, for Gibraltar, Guernsey and Isle of Man).

Most of the stamps produced before the May 19 wedding date feature engagement photographs.

In addition to those already reported in Linn’s, Antigua and Barbuda, The Gambia, Grenada, Marshall Islands and Tuvalu also issued stamps for the engagement, according to a recent announcement from the new-issue agency Inter-Governmental Philatelic Corp.

For information about the Royal Wedding stamps from New Zealand and Tokelau, visit the website.