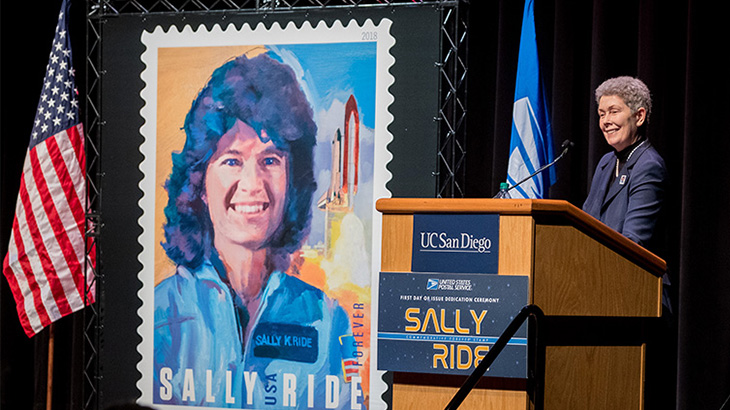 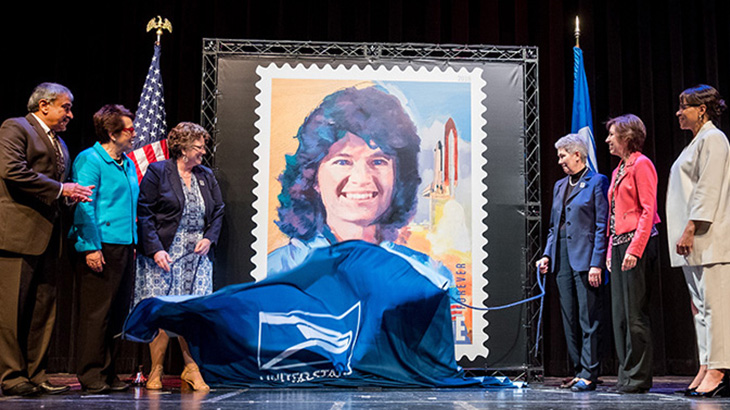 Friends and colleagues of Sally Ride come to the stage to help unveil the stamp. Photo by Daniel Afzal, U.S. Postal Service. 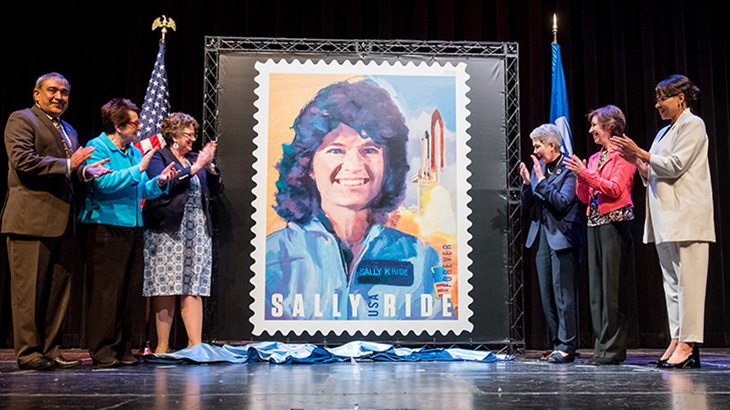 The Sally Ride tribute stamp features artwork by Paul Salmon; the art was first sketched in charcoal and then rendered in oil paint. Photo by Daniel Afzal, U.S. Postal Service. 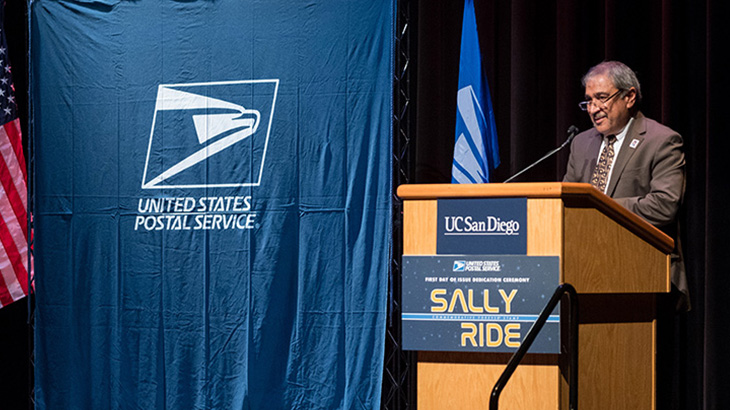 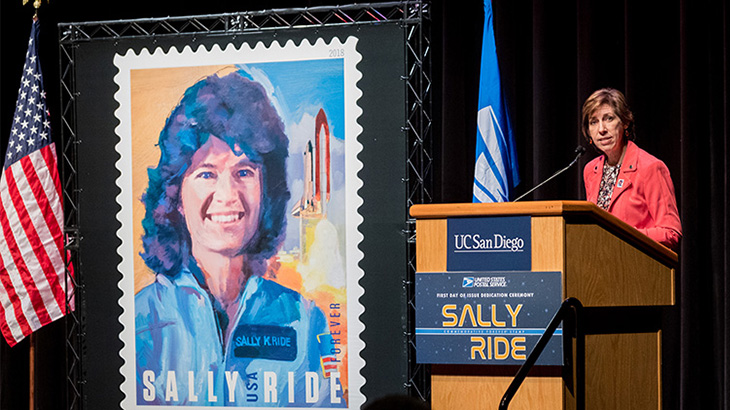 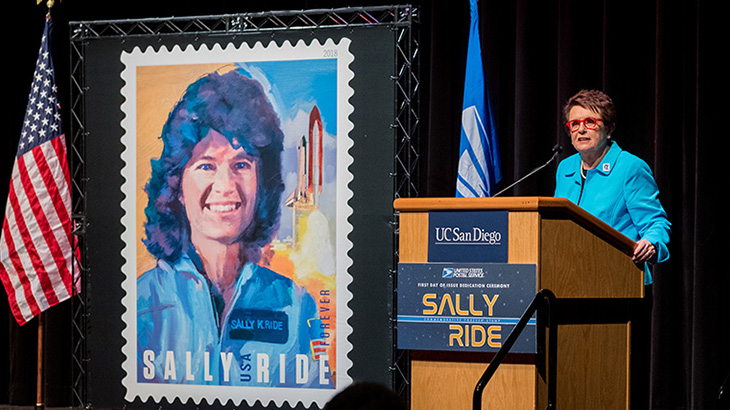 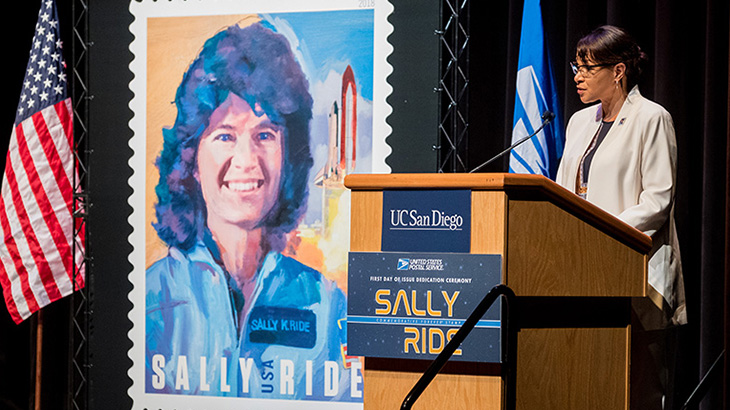 Family, friends and colleagues of Sally Ride — the first American woman in space — came together to dedicate the new United States forever stamp celebrating her achievements May 23 at the University of California, San Diego.

The nondenominated (50¢) stamp was issued in La Jolla, Calif., a community where Ride lived and worked before she passed away from pancreatic cancer in 2012.

Ride made history when she took her seat aboard the Challenger on June 18, 1983; not only was she the first American woman in space, but she was the youngest American in space at the age of 32, a distinction she still holds today.

Ride held many titles in addition to the accolades associated with that first, historic mission.

“She was an astronaut, she was a scientist, she was a writer, she was a teacher and a she was a mentor — she was just about everything you can ever imagine someone to be,” said Pradeep K. Khosla, chancellor at UC San Diego, where Ride was a professor of physics.

Dr. Tam O’Shaughnessy, Ride’s life partner, took the podium after the stamp was unveiled, and shared stories of Ride’s interest in stamp collecting.

“That is an amazing stamp!” O’Shaughnessy began. “… it captures Sally’s warm smile, and that mischievous little twinkle in her eye. It’s drop-dead gorgeous.

“Sally started collecting stamps when she was a girl, and she continued to do so her whole life — especially stamps of the Olympics and space exploration,” O’Shaughnessy continued, adding that Ride was honored when other countries issued stamps with her portrait on it.

“But a United States postage stamp? She would be thrilled beyond belief and deeply honored,” she said.

The two women, along with three others, cofounded Sally Ride Science in 2001. The organization’s mission is to encourage students to pursue STEM (science, technology, engineering, and math) education throughout their schooling. Sally Ride Science was was relaunched at UC San Diego in 2015, where it continues to operate.

“She did such a superb job during her mission, that it wasn’t really a question after that if a woman could do the job,” she said. “It made it easier for the rest of the women in her class to get assigned a flight, and for all the women who were subsequently selected to the astronaut program.”

Ochoa went on to note how accessible Ride was, meeting with women who came into the space program after her.

“As much in demand as she was, she always made time to meet with young women who dreamed of becoming astronauts,” Ochoa said.

Professional tennis superstar Billie Jean King, a long-time friend of Ride, reminded the audience that Ride was also an athlete. The two became friends due to their love of tennis, and King explained that Sally preferred team sports over individual sports.

“Therefore, she preferred doubles over singles. Me too.” King said, chuckling. In addition, King spoke about what Ride's first mission meant to the country.

King closed her remarks with a fitting quote from Bob Dylan’s “Forever Young.”

“In honor of the Sally Ride forever stamp,” she said. “‘May you build a ladder to the stars, and climb on every rung. May you stay forever young.’”

The Sally Ride forever stamp design by USPS art director Ethel Kessler features artwork by Paul Salmon; the art was first sketched in charcoal, and then rendered in oil paint. The Sally Ride portrait is modeled after a detail of a group photograph of the Challenger crew taken in January 1983 in Johnson Space Center, Houston, Texas. The image of the space shuttle is modeled after a 1983 photograph of the Challenger liftoff.