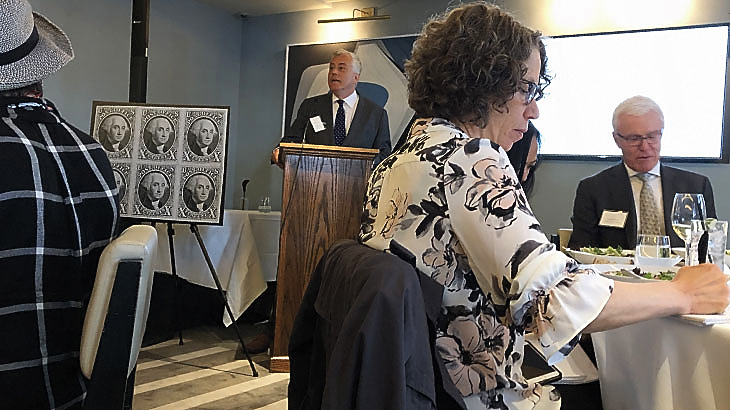 Robert A. Siegel Auction Galleries Inc. president Scott R. Trepel speaks to journalists and feature writers at a May 8 luncheon for journalists in conjunction with the upcoming series of sales of the William H. Gross collection of U.S. stamps and postal history. 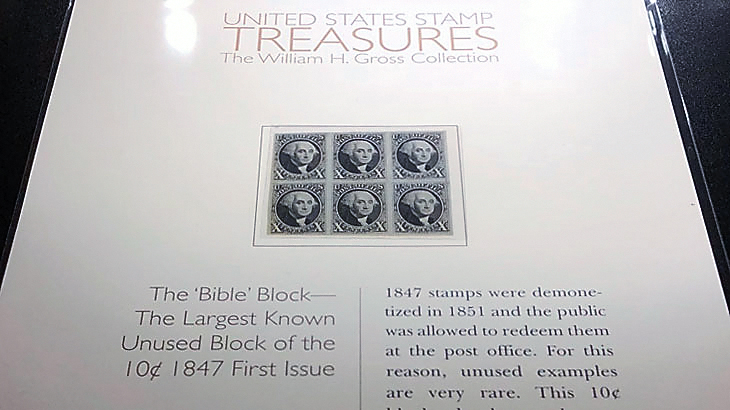 From the William H. Gross collection of U.S. stamps and postal history, the “Bible Block,” the largest known unused block of the 1847 United States 10¢ first issue, was displayed at a luncheon in New York City held May 8 in conjunction with publicity for the upcoming auction.
Previous
Next

This coming Oct. 3 the eyes of the philatelic world will turn toward New York City for the first sale of United States stamps from the William H. Gross collection.

Charles Shreve and Tracy L. Carey brought the collection to Robert A. Siegel Auction Galleries Inc. for the auction.

Siegel expects that the sale will surpass the $9.1 million single-day stamp auction record achieved with the 2007 sale of the Gross collection of Great Britain.

With such powerful stamps and covers up for sale, a key part of the marketing plan is to find new buyers outside of the philatelic community.

Siegel is being innovative with publicity for this auction and invited feature and freelance writers that work for major magazines in the United States to a luncheon held May 8 in New York City.

At the luncheon, Shreve, Siegel president Scott R. Trepel, and Cheryl Ganz, former curator at the National Postal Museum, shared interesting stories about philately and some of the stamps and covers to be offered in the sales.

The hope is that those in the room would be intrigued enough by some element of the presentation or conversation to write a feature-style article in advance of the sale.

“Coming up with all the sales of the United States stamps, which we hope will bring at least $40 million, all those funds will similarly go to charities and nonprofits which will be announced before the first sale on Oct. 3,” Shreve said.

To start the presentation, Trepel explored three general facts about philately and posed two question to get the writers thinking.

The first fact (as shown in a PowerPoint presentation) was “Before 1840, it was customary for the person receiving a letter to pay the postage.”

Followed by “After British postal reforms in 1840, Congress waited 5 years to lower rates and another 2 years to issue stamps.”

The third was “The Pony Express was a publicity stunt that bankrupted its owners and lasted only 19 months.”

The first of the two questions was “A presidential candidate in the 1848 election appears on a stamp. Can you identify the candidate?” Trepel provided a hint, “This candidate’s nickname was ‘Old Rough and Ready.’ ”

Trepel ended with a question asking what the largest number of people depicted on a U.S. postage stamp is and added the caveat that the people had to be identifiable. As an answer, he showed an image of the 1869 24¢ Declaration of Independence stamp (Scott 120).

Shreve shared stories about Gross and explained that “the U.S. stamps were his pet.”

He also recounted tales of purchasing stamps at auction for Gross throughout the years, Gross’ generosity to the Smithsonian’s National Postal Museum and more.

Ganz then shared the importance of the collection to philately.

Cheryl added, “His collection is unique because of it and he did it in one lifetime.”

In closing, Trepel said, “Bill Gross’s collection is phenomenal. It’s what serious collectors aspire to build. And the value of it is what some people will write about, but for me the great part of this collection is how its a tangible connection to places, people, things and events of the past. It’s what I love.”

Within 24 hours of the luncheon, the website of the financial news magazine Barron’s published a story on the auction, so the efforts are starting to work.

I anticipate additional feature stories to appear in late summer. The journalists I chatted with at the luncheon all found different elements of philately that they could envision writing about. These ranged from discussions about Waterbury fancy cancellations, to engraving as an art form, and even exploring why early stamps don’t have much color to them.

Not only will such articles benefit the sales, but publicity for stamp collecting in the popular press is a great win for the hobby, too.