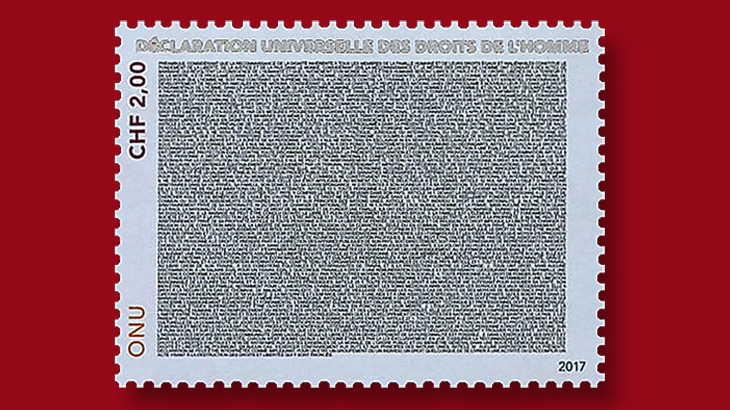 The Guinness world record for the most words on a postage stamp recently was awarded to this 2-franc commemorative stamp from the United Nations Postal Administration. Microprinted on the stamp are 1,969 words in French.

The United Nations Postal Administration has achieved an official Guinness world record for the most words on a postage stamp: 1,969.

The stamp is one of three in a souvenir sheet issued by UNPA Oct. 27, 2017, commemorating the translation of the Universal Declaration of Human Rights into 500 languages (Scott 1177).

Each stamp design features the preamble of the Universal Declaration of Human Rights microprinted in a different language.

In French, the preamble includes 1,969 words, so the 2-franc stamp for use from the U.N. post office at the Palais des Nations in Geneva, Switzerland (Scott 1177b), received the Guinness recognition.

UNPA applied for the Guinness record in late 2017, but only recently received confirmation that its application had been accepted.

The listing for this Guinness world record can be found online.