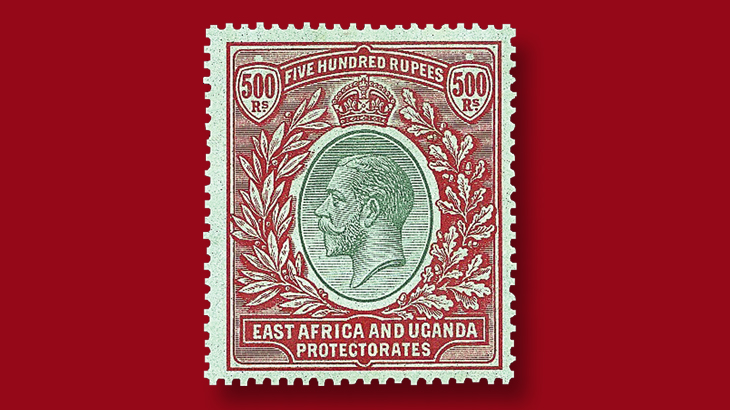 An elusive issue from the reign of King George V, this unused 1912 500-rupee stamp of East Africa and Uganda Protectorates will be offered during the Dec. 3-7 David Feldman auction series in Switzerland. 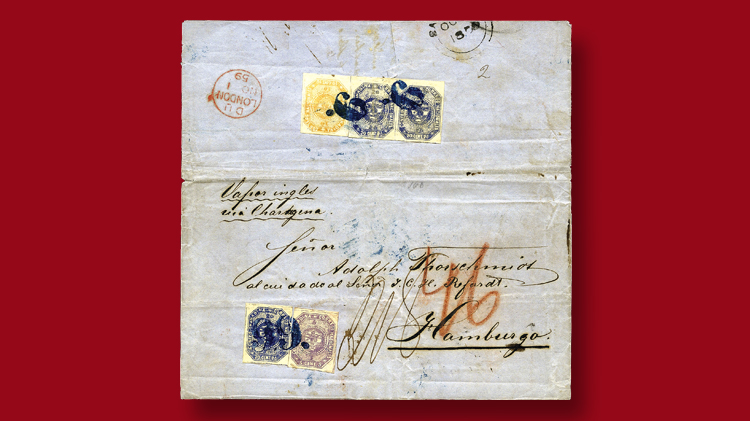 The Feldman auction series will also include an 1859 folded letter franked with three first-issue stamps of Colombia and mailed from Bogata to Hamburg.
Previous
Next

The David Feldman international auction firm will hold its next auction series Dec. 3-7 at its galleries in Geneva, Switzerland.

The catalogs can be downloaded in PDF format, and online viewing and bidding options are available at www.davidfeldman.com. Estimates for the various lots are listed in euros, British pounds or Swiss francs depending upon the material.

Among the early British items is a complete plate reconstruction of the 1840 1-penny black Queen Victoria stamp consisting of 240 of the famous Penny Black stamps.

According to the Feldman lot description, the stamps all show four margins, many with clear strikes of the Maltese Cross cancel, and the assemblage includes a strip of six, a block of four, two horizontal pairs and one vertical pair, “the rest being fine to very fine singles (incl. two with inverted watermarks).”

The stamp is described as extremely fresh and very fine, and is accompanied by a 1999 British Philatelic Association certificate.

The 2019 Scott Classic Specialized Catalogue of Stamps and Covers 1840-1940 notes that this high-denomination issue was available for postage but nearly always was used fiscally.

The Feldman sale offers a number of intriguing postal history items, including an 1859 folded letter mailed from an English merchant in Bogata, Colombia, to his brother in Hamburg (then part of Prussia).

The first-issue Colombian stamps paying postage on this three-color franking are the 5-centavo and 20c on the front, tied together by a bold “9.” handstamp, plus a pair of the 20c and one 10c similarly tied on the reverse.

All stamps franking the cover sport ample to huge margins, according to Feldman, which calls it “one of the most important first issue covers from anywhere in South America.”

Among the many other appealing lots in this auction series are a set of three imperforate sheets of Israel’s 1948 Doar Ivri 250-mil, 500m and 1,000m stamps, one of three such sheet sets known, according to Feldman.

United States collectors will find what is described as an extensive and specialized collection of the 1865-90 Waterbury, Conn., cancellations, comprising 123 stamps and 220 covers or cards in a single lot, with the provenance identifying Bill Gross as an owner.