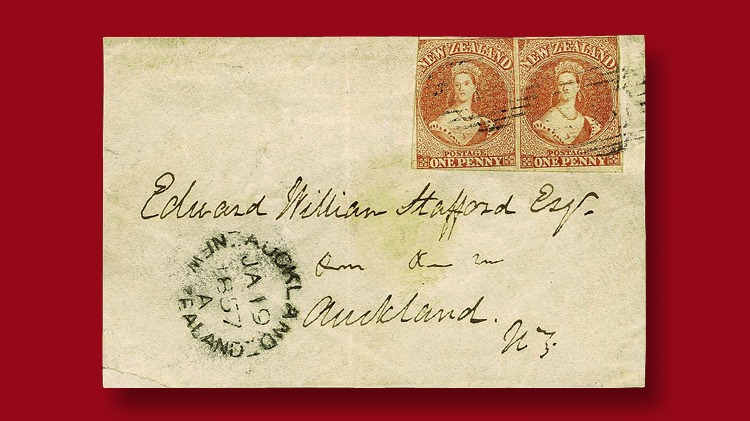 The Castle cover from New Zealand is franked with the only known pair of the 1856 1-penny orange vermilion imperforate stamp with Large Star watermark. It will be offered during the Nov. 26-Dec. 1 Corinphila auction in Zurich, Switzerland. 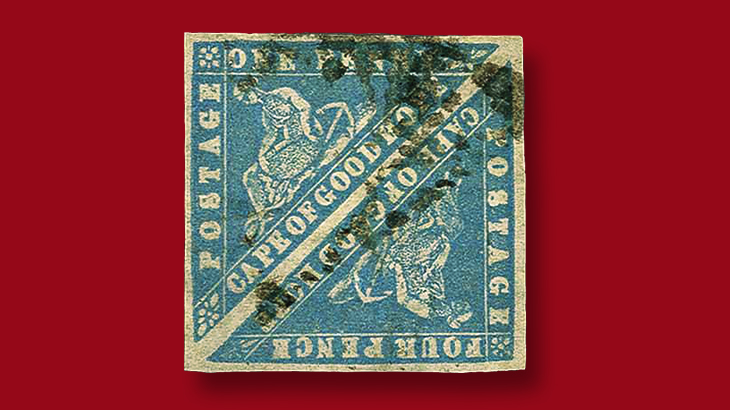 The Nov. 26-Dec. 1 Corinphila auction in Zurich, Switzerland, is offering a prominent rarity of New Zealand.

The 1857 Castle cover is franked with a pair of the rare 1856 1-penny orange vermilion imperforate with Large Star watermark. It is called the Castle cover in honor of its discoverer, T.H. Castle, and is described in The Encyclopaedia of British Empire Postage Stamps, Vol. IV published by Robson Lowe.

Since no other pair on cover is known, the Castle cover has earned recognition in the Scott Classic Specialized Catalogue of Stamps and Covers 1840-1940. Under its listing for New Zealand Scott 7e, the catalog includes a listing for an on-cover pair with a value of $65,000.

The Scott value appears in italics to denote an item that can be difficult to value accurately.

The pair on the cover also represents the only known multiple, according to Corinphila, which notes eight examples of the variety known (the standard issue has no watermark).

The cover is listed in the auction with a starting bid of 40,000 Swiss francs, which, with the near equivalency of the Swiss franc and the U.S. dollar in early November, equaled roughly $39,830.

A Corinphila catalog of 214 lots for Cape of Good Hope 1853-1903 offers another rarity, a color error of the 1861 1d triangular provisional issue known as the Wood Block, with the stamp printed in “pale milky blue” on laid paper, se-tenant with the triangular 4d stamp printed in the same color, according to an examination summary by expertizers at the British Philatelic Association.

The 1d stamp (Scott 7) is normally printed in a shade of vermilion or red.

This particular used pair, one of four known, has not been offered on the market for 36 years, according to Corinphila, and it boasts a provenance that places it in the collections of Philipp la Renotiere von Ferrary and Maurice Burrus.

Along with the Europe and overseas catalog that includes the Castle cover and the Cape of Good Hope catalog, the Corinphila auction offers separate catalogs for Chile (the Colon issues), Australian states and Australia 1850-1960, South Australia’s departmental stamps of 1868-74, classic Switzerland from the Jack Luder collection, and additional Switzerland and Liechtenstein.

The last catalog includes an uncommon unused pair of the Zurich 4-rappen black cantonal stamp with horizontal red line underprint, of which only six pairs are known. This pair was once in the collection of Alfred F. Lichtenstein, Corinphila notes, and is listed with a starting bid of 60,000 Swiss francs ($59,750).

The auction will be conducted in the Corinphila galleries in Zurich. Lots may be viewed online, with online bidding options available.