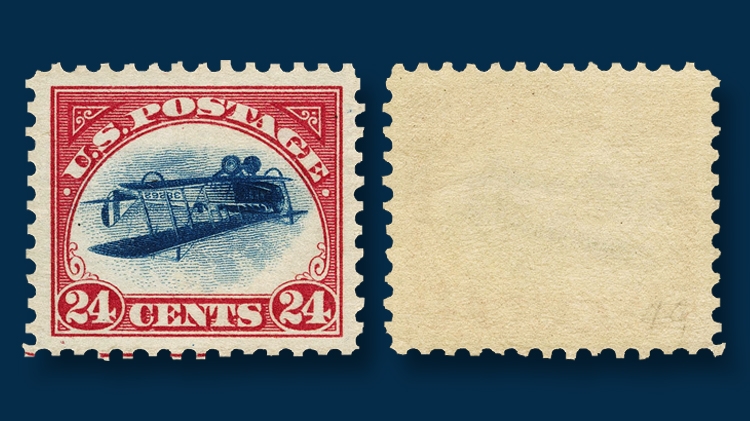 The 1918 24¢ Jenny Invert airmail error stamp from position 49 was sold by Robert A. Siegel Auction Galleries for nearly $1.6 million on the afternoon of Nov. 15.

It pays to keep your stamps safe and sound. That is the undeniable lesson of the Nov. 15 sale by Robert A. Siegel Auction Galleries in New York of the superb, recently rediscovered position 49 of the 24¢ Jenny Invert airmail error.

The 1918 United States stamp, which had lain secretly hidden away in a bank safe-deposit box for a century, rarely exposed to light and never hinged onto an album page, sold for $1,593,000, including the 18 percent buyer’s premium, beating the prior record of $1.35 million set for the position 58 Jenny Invert in 2016.

The bidding, which was broadcast online with live audio at StampAuctionNetwork.com, opened at $625,000. It quickly surged past $1 million, with dueling internet bidders and others on the phone and in the room. It advanced steadily to $1.25 million, where it paused before the hammer finally came down at $1.35 million, going to an internet bidder identified only as I-350.

Selling the stamp was “one of the highlights of my career,” said Scott Trepel, president of Siegel. “That blank spot on the web site bothered me for a long time,” he added, referring to the Siegel online census at InvertedJenny.com.

During its 100 years of solitude, the stamp was essentially lost to philately, though fans never gave up hope that it would someday resurface. Earlier this year, an anonymous Chicago-area family came forward and submitted the stamp to the Philatelic Foundation in New York for authentication.

The Foundation had previously certified 85 other examples of the 1918 inverted-center error (Scott C3a).

Position 49 is one of just six to still have pristine gum and was assigned a grade of extremely fine-90, meaning it has among the best centering of any Inverted Jenny.