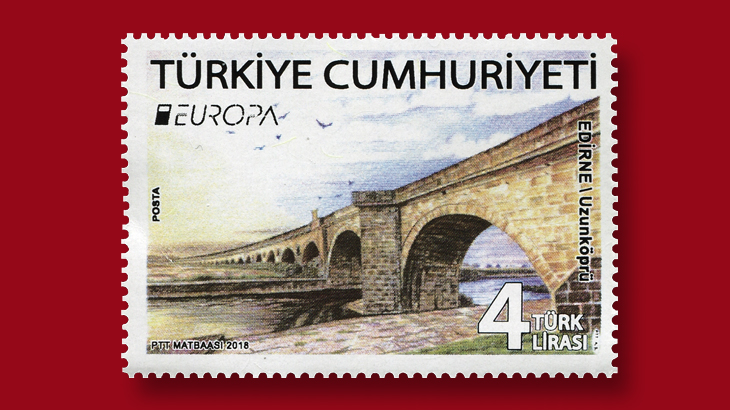 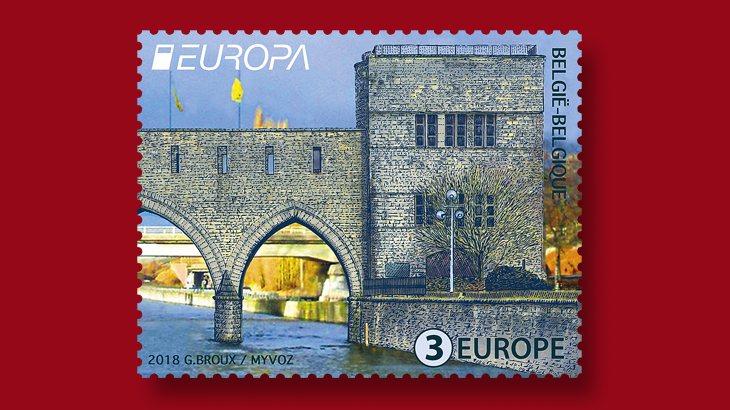 A Belgian stamp was selected the best Europa stamp of the year by a jury of seven philatelic experts. The stamp depicts a 13th-century bridge that served as a watergate.
Previous
Next

Stamps of Turkey and Belgium were selected as the most beautiful Europa stamps of 2018 in two separate competitions arranged by PostEurop, the Association of European Public Postal Operators.

Both stamps depict bridges, the theme for the 2018 multi-nation Europa stamp series. A total of 57 postal administrations participated in the competitions, each entering one stamp.

Turkey’s 4-lira stamp issued May 9 shows the Edirne Uzunkopru Bridge, a stone bridge built by Ottoman architect Muslihiddin between 1426 and 1443.

With a length of more than 4,500 feet, it is the longest stone bridge in the world today, according to UNESCO. (The bridge has been included on the UNESCO World Heritage tentative list).

This is Turkey’s second win in a row in the popularity contest open to the public through the PostEurop website. In 2017, Turkey’s Europa stamp picturing Kars Castle (Scott 3549) was voted most popular.

A Belgian stamp showing one of Europe’s oldest bridges, Pont des Trous in Tournai, won the juried competition. Built in the 13th century as part of the city’s walls, the bridge served as a watergate on the Scheldt River.

The stamp is se-tenant (side-by-side) with another Europa stamp in a souvenir sheet issued June 6. Each stamp design depicts half of the bridge.

The two Belgian Europa stamps are nondenominated, paying a rate for nonstandard mail to European countries. They were engraved by Guillaume Broux and designed by Myriam Voz.

Stamps issued by Poland, Georgia, Hungary, Finland and Croatia also were winners in the Europa competitions.

Poland’s 5-zloty stamp showing the Tczew Bridge over the Vistula River came in second place in the popularity poll. The bridge was built in the mid-19th century as part of the Prussian Eastern Railway. The stamp was issued May 2.

Third place in the popularity poll went to Georgia’s Europa stamp released May 31. The stamp pictures an arched stone bridge in Sukhumi that dates back to the late 12th century. It is known both as Besleti Bridge and Queen Tamar Bridge.

The popularity contest opened May 9 and closed Sept. 9. Agnieszka Trzaskowska, chair of the PostEurop Stamps and Philately working group, reports that a record 23,000 votes were received.

In the juried competition, Hungary and Finland tied for second place.

Hungary’s 345-forint stamp shows Megyeri Bridge, which opened to traffic in 2008. The stamp was issued May 2 in a souvenir sheet of four, with two of this design and two stamps picturing Koroshegy Valley Bridge.

Finland’s Europa stamp, issued May 9, shows a wilderness bridge in Suomussalmi. The design is based on Juha Harkonen’s photograph of sunset at Lake Seitenahveninen.

Placing third was Croatia’s May 2 stamp featuring the Franjo Tudman Bridge in Dubrovnik. The bridge opened in 2002.

The co-chairman of the jury for the Europa stamp competition were Botond Szebeny, secretary-general of PostEurop, and philatelist Guy Coutant. Also serving on the jury were Trzaskowska; Arie Piet, former CEO of security printer Joh. Enschede and director of stamp printing of the National Bank Belgium; Andree Trommer, secretary-general of the International Federation of Philately; and stamp designers Olaf Neumann and Stefan Klein.

The awards for the juried competition were presented Sept. 15 at the Belgian Philatelic Grand Prix in Brussels, while those for the online popularity competition were announced during PostEurop’s plenary assembly held Oct. 3-4 in Tbilisi, Georgia.