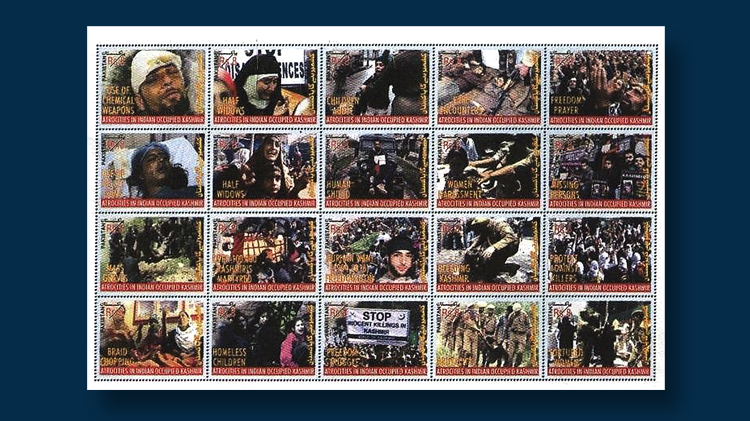 A set of postage stamps was partly responsible for the sudden cancellation of a meeting between India and Pakistan, according to several news reports.

The foreign ministers of the two nations were supposed to meet on the sidelines of the recent United Nations General Assembly (Sept. 18-Oct. 1) in New York City.

Shortly after the meeting was announced, India canceled it. A Sept. 21 report on the website of The Times of India quoted India’s Ministry of External Affairs spokesperson Raveesh Kumar as saying, “The recent developments show that any dialogue with Pakistan is meaningless.”

Kumar specifically cited two developments: “The latest brutal killings of our security personnel by Pakistan-based entities and the recent release of a series of 20 postal stamps by Pakistan glorifying terrorists.”

According to the new-issue announcement from Pakistan Post, the 20 stamps were issued July 13, Kashmir Martyr’s Day. News reports have given the issue date as July 24, the day before Pakistan’s general elections.

The new-issue announcement said, “13th July is the milestone in the history of the Kashmir struggle for freedom. On this day [in 1931] 21 Kashmiris had sacrificed their lives for the supreme cause of freedom of Kashmir from the clutches of despotic Dogra rulers.”

The new-issue announcement further described in vivid detail what it called a “reign of terror” by Indian forces and a “dark blot on the history of mankind.”

Shown above is an image of the se-tenant pane of 20 8-rupee stamps from that new-issue announcement. Each stamp is inscribed at the bottom “Atrocities in Indian occupied Kashmir.” An additional inscription on each design explains what situation is represented on that stamp.

Some of the stamp designs have been criticized for being misleading or false representations. One group, Roots in Camera — which describes itself as an initiative launched by the Kashmiri Pandit Youth — wrote a letter to the United Nations Secretary-General Antonio Guterres asking him to intervene and have the stamps withdrawn.

Pakistan’s National Security Printing Co. printed 20,000 panes, and according to a BBC report (Sept. 29), they are selling well, especially “after the spat over the stamps hit the headlines.”

The Indo-Pakistani conflict over Kashmir dates back to 1947, when the two nations gained their independence.

According to a March 25 report from CNN: “The separatist violence has killed more than 47,000 people, which does not include people who have disappeared due to the conflict. Some human rights groups and nongovernmental organizations put the death toll at twice that amount.”