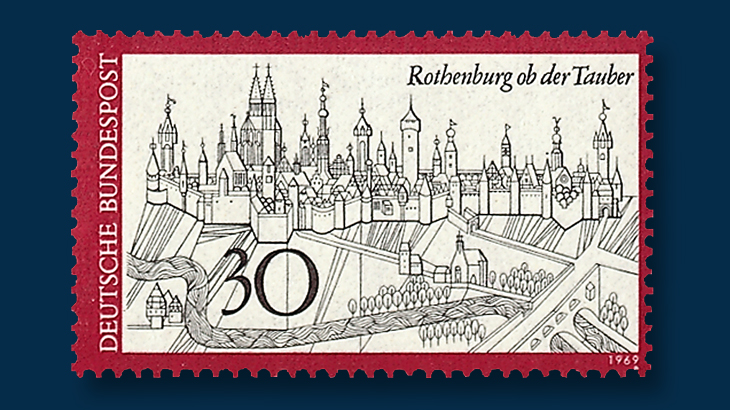 The medieval Bavarian town of Rothenburg ob der Tauber was commemorated on a 30-pfennig German stamp in 1969. Two new stamps in Germany’s Beautiful Panoramas series will celebrate the historic site in 2019.

Germany’s €0.70 Stamp Day postage stamp will be issued Sept. 13. The design shows four stamps of the North German Confederation and marks the 150th anniversary of the postal administration established in 1868.
Previous
Next

Germany’s Ministry of Finance has announced the country’s stamp program for 2019, and one of those stamps will salute America’s most famous space feat.

A single stamp honoring the 50th anniversary of the first moon landing is listed on the country’s 2019 stamp program.

In its publication of the 2019 stamp program details, the German finance ministry identified only the subject matter for 52 stamp issues and did not reveal illustrations, design details or issue dates.

In a joint issue with Switzerland, Germany will also issue a stamp to mark the 500th anniversary of the religious reformation movement led by Huldrych Zwingli in Switzerland.

A stamp will honor German-born artist Axel Scheffler and the children’s book The Gruffalo by Julia Donaldson, which Scheffler illustrated. Scheffler also designed Christmas stamps for Royal Mail of Great Britain in 2012 (Scott 3119-3126).

Another stamp will honor Fritz Bauer (1903-68), a human rights activist and prosecutor in the Frankfurt Auschwitz trials.

Germany will issue one Europa series stamp on the subject of native birds.