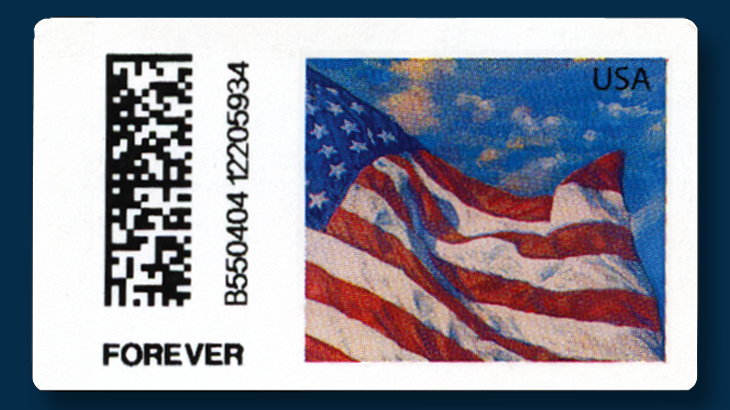 The Flag design vended by kiosks since 2014. A new variety with a numbers-only serial number appeared earlier this year as new kiosks were installed in U.S. post offices. 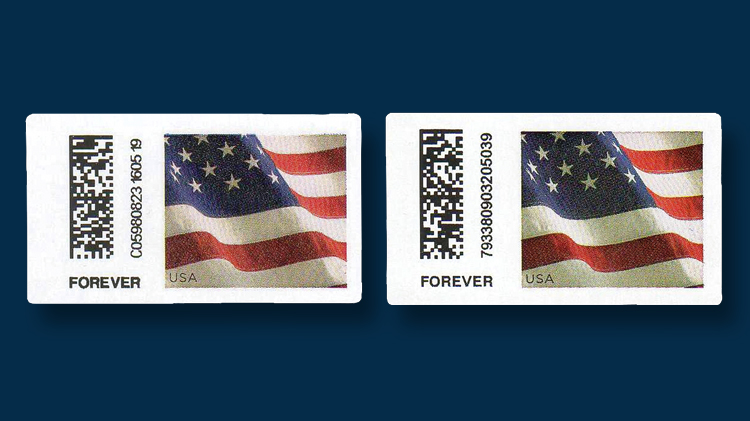 A new Flag design is turning up in postage vending kiosks in United States post offices. The two varieties pictured here are dispensed from old kiosks (left) and new kiosks (right). The serial number on the variety issued by an old kiosk begins with a let 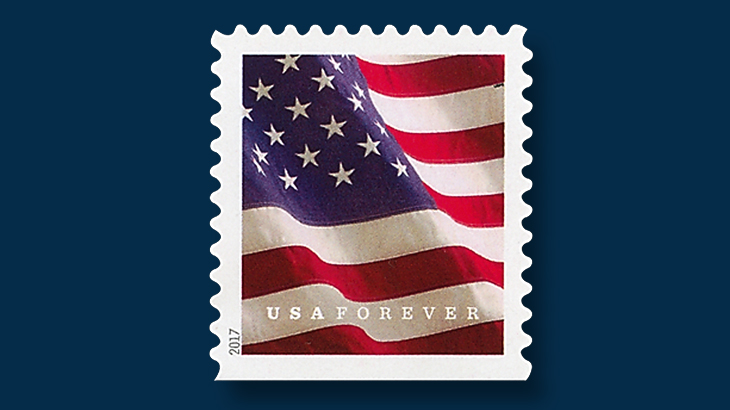 The design of the new Flag computer-vended postage stamp is based on this forever stamp design from 2017 issued in coils and booklets.
Previous
Next

The image on the new issues pictures only a detail of a fluttering 50-star flag, with 13 stars showing entirely or partially, along with segments of eight red or white stripes.

The design is derived from the same Tom Grill photograph that serves as the vignette for the nondenominated (49¢) forever stamp issued in coils and various pane (booklet) formats on Jan. 27, 2017 (Scott 5158-5162). The illustration on the computer-vended stamps is cropped a little tighter than it is on the 2017 postage stamp.

The 2018 version (Scott CVP102) of the 2014 computer-vended Flag stamp uses the same illustration, but its vertical serial number also consists of numbers only with no single-letter prefix.

The 2019 Scott Specialized Catalog of United States Stamps and Covers reports that the earliest known vending date for the 2018 variety showing the 2014 Flag design is April 27, 2018.

Elias reports that his earliest find of the newest Flag design was Aug. 23, in an old-style kiosk in Plano, Texas, so that stamp’s serial number begins with a letter.

His first find of the new design vended from a new machine was on Sept. 3 from Castleton, Ind. Elias notes that there could be earlier examples.

The serial number on each stamp includes the date.

The first four characters in the number string identify the dispensing kiosk, and the next five show the date, with a single digit (8) for the year (2018), followed by four digits representing the month and date. The final six digits tell the time of day, with two digits each for hour, minute and seconds.

Elias notes that he encountered kiosks vending stamps with the USPS logo printed in black upon the new Flag design. This variation occurs when the machine is not properly programmed to vend labels with the preprinted color image.

The labels loaded into the kiosks are preprinted with only the Flag design. The black imprints, including the bar code and serial number, are printed on the label when a customer completes an order using the kiosk.

Elias has prepared a four-page exhibit about the new kiosks and the Flag stamps they are dispensing. His exhibit will be shown at the 2018 Mid-Cities Stamp Expo, Nov. 9-10, at Grapevine Convention Center, 1209 S. Main St., in Grapevine, Texas, near the Dallas/Fort Worth International Airport.

He has also published a 10-page article in the Autumn 2018 issue of the Meter Stamp Society Quarterly Bulletin about computer-vended postage stamps and changes in the USPS self-service kiosks.

It is likely that another new computer-vended postage stamp will be offered through the kiosks before the end of the year. Since 2012, the Postal Service has created holiday-theme vended stamps each year, issued sometime between mid-October and early November.

Not all post offices have the self-service kiosk that dispenses vended postage, and those that do might not have the new Flag design available.

Collectors interested in obtaining the new vended postage stamps can look online for a post office location that has the self-service kiosk installed.

Visit tools.usps.com and look for the Quick Tools link at upper left. Hover on the link and select Find USPS Locations from the choices that appear.

On the next screen, under Location Types, click the down arrow and select Self-Service Kiosks from the drop-down menu, enter a city and state (or ZIP code), select a distance radius for your search and click on the search button.