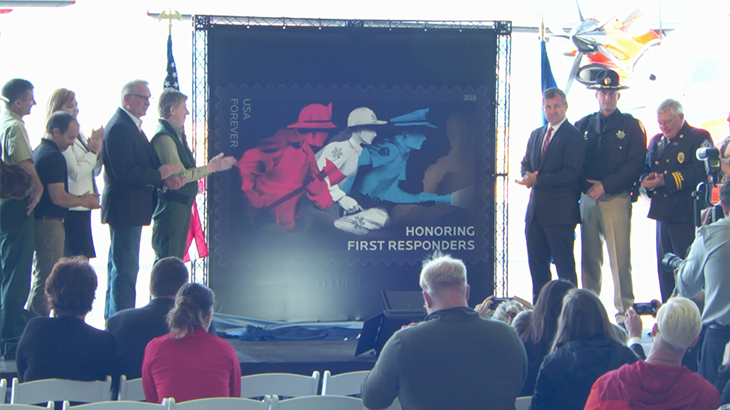 The design was unveiled at the Aerial Fire Depot and Smokejumper Center in Missoula, Mont. Screen grab courtesy of USPS video.

Two days after the 17th anniversary of the Sept. 11, 2001 attacks, the United States Postal Service dedicated a new stamp design for first responders in Missoula, Mont., against a beautiful backdrop of blue skies and mountains.

The dedication was held at the Aerial Fire Depot and Smokejumper Center, home to the nation’s largest training center for firefighters who parachute into remote areas of national forests to combat wildfires.

The stamp design shows three figures shaded in red, white and blue, respectively: a firefighter carrying an ax, an EMS responder, and a law enforcement officer shining a flashlight.

“Our nation’s first responders rush into life-threatening situations for the benefit of others,” he said. "...We call out for their help tens of millions of times each year, and every time they answer the call.

“The Postal Service is pleased to honor their skill, dedication and unfailing bravery with this stamp.”

Tim Fox, Montana’s attorney general, spoke about the significance of having this ceremony so soon after the Sept. 11 anniversary and reflected on where he was that day 17 years ago.

“This first issue stamp honoring first responders, at its core really honors those who have lost their lives in the line of duty,” he said.

Steve Hirsch, first vice chair of the National Volunteer Fire Council emphasized the importance of local volunteers to the communities across the country. He said the close relationship between the postal service and the volunteer fire service goes back to Ben Franklin, the country’s first postmaster general, and a volunteer firefighter in 1736.

“There’s kind of a love affair there,” he said, smiling. “Me being a stamp collector, too, adds a little bit extra to it as well.”

Smokey Bear, a national mascot for forest fire prevention, was also in attendance.