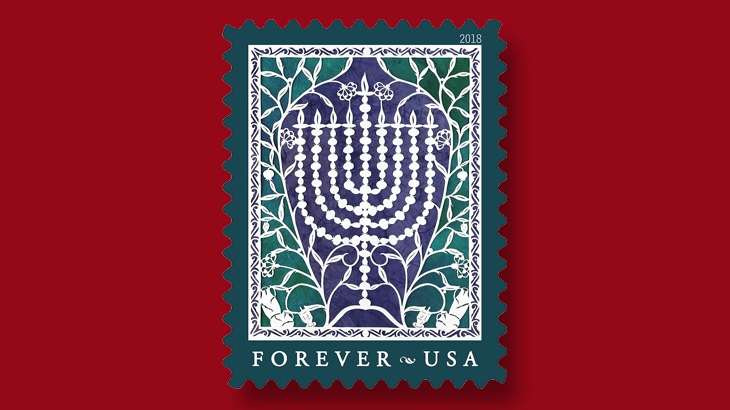 The 2018 Hanukkah forever stamp from the United States Postal Service is part of an Oct. 16 joint issue with Israel Post. 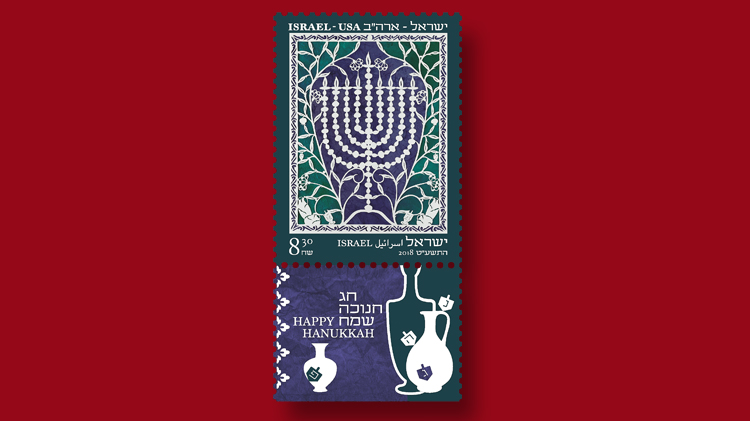 Israel’s 8.30-shekel Hanukkah stamp for 2018 also shows Tamar Fishman’s artwork of a menorah, an oil jug, dreidels and a pomegranate plant. The attached tab below the stamp, from the bottom row of the pane of 15, also depicts oil jugs and dreidels.
Previous
Next

For the second year in a row, the United States Postal Service is engaging in an end-of-the-year joint issue with another postal authority.

This year, the Jewish holiday of Hanukkah will be marked with a nondenominated (50¢) forever stamp from the United States and a companion 8.30-shekel issue from Israel Post.

The U.S. stamp will be issued Oct. 16 in a pane of 20. An 11 a.m. first-day ceremony will take place at Touro Synagogue, 85 Touro St., Newport, R.I. The USPS judicial officer Judge Gary Shapiro will lead the event.

Those wishing to attend are encouraged to register online at usps.com/hanukkahstamps to gain entrance.

Guests are advised to enter through the Loeb Visitors Center at 52 Spring St.

The synagogue hosting the event was itself the subject of a 20¢ U.S. postage stamp issued Aug. 22, 1982 (Scott 2017). It is America’s oldest synagogue and a national historic site.

The U.S. Postal Service described the design of its new forever stamp.

“The new Hanukkah stamp artwork features a menorah created using the techniques of the traditional Jewish folk art of papercutting. Artist Tamar Fishman made a pencil sketch of the design and then with a fine blade, cut the two-dimensional image on white paper. She chose blue-purple and green papers for the background to highlight the central design.

“Behind the menorah is a shape reminiscent of an ancient oil jug that represents the heart of Hanukkah. Additional design elements include dreidels — spinning tops used to play a children’s game during the holiday — and a pomegranate plant with fruit and flowers.”

Israel’s version of the stamp uses the same artwork. “ISRAEL-USA” appears at upper left. The denomination and “ISRAEL” are found at lower left.

The Israeli stamp is being issued in a pane of 15, with a row of five decorative tabs (all the same design) below the bottom row of five stamps.

This is the second joint issue from the United States and Israel to celebrate Hanukkah, the wintertime “Festival of Lights” that commemorates the rededication of the holy temple in Jerusalem after it had been desecrated by oppressors in the second century B.C.

Observances of Hanukkah include lighting one new candle on the menorah on each of the eight nights of the holiday.

The menorah is featured on the U.S. black pictorial first-day cancel prepared for the Hanukkah issue. “Hanukkah” is spelled out on a banner in front of the menorah.

The color first-day cancel is printed in shades of blue-purple and green that complement the stamp. The design shows two large jugs near the framed word “Hanukkah.”