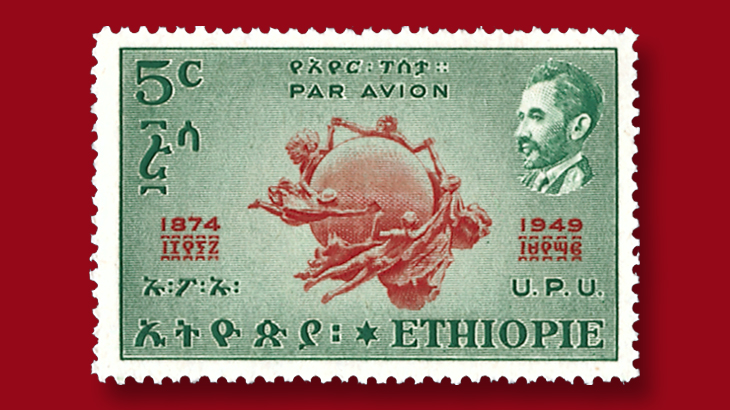 Ethiopia commemorated the 75th anniversary of the Universal Postal Union on this airmail stamp issued in 1950. More recently, Ethiopia hosted the UPU congress held this September in Addis Ababa.

President Donald Trump said that the current UPU rate structure “distorts the flow of small packages around the world by incentivizing the shipping from foreign countries that benefit from artificially low reimbursement rates.”

The president directed the secretary of state to relay his complaint to the UPU’s director-general and raise these issues at the September UPU Extraordinary Congress in Ethiopia.

Trump directed the secretary to report to him by Nov. 1 whether the UPU responds to the complaint.

If it doesn’t, the president has raised the possibility that the United States should set its own international rates.

That would break a tradition that dates to 1874 when the United States and 20 other countries established the UPU as an international organization to set postage rates for all mail between nations.

The president’s proposal was praised by Robert G. Taub, chairman of the Postal Regulatory Commission.

In an Aug. 24 news release, Taub said it was an “enormous leap forward to finally addressing” issues that have affected American businesses “who are trying to compete fairly in these global markets.”

The anticompetitive nature of the UPU has concerned the U.S. government since the Reagan administration, Taub said, adding that the UPU has done little to answer the complaints.

“The UPU continues to promulgate agreements that require posts to undercharge for delivery of inbound mail, to insulate postal shipments from full application of national customs laws, and to promote a different legal regime for postal operators and competing private carriers,” Taub said.

Trump’s memo referred to his support for U.S. legislation that would require overseas mailers to submit electronic data about what is inside any parcels bound for the United States.

The president has used his tweets to repeatedly attack the U.S. Postal Service for giving retail giant Amazon unfairly low postage rates for its parcels.

The UPU issued a statement Aug. 27 saying that the issues raised by Trump “among many others, are already the subject of ongoing programs and will be discussed by member countries” at the Second Extraordinary Congress of the UPU in Addis Ababa Sept. 3-7.

“The UPU secretariat will make available the results of those discussions one they have taken place,” the statement said. “Meanwhile the UPU will continue to study the memorandum, but will make no further comment to journalists ahead of the deliberations of its member countries.”

The U.S. Postal Service said it welcomed Trump’s effort to boost its international revenues, noting it has no control over the rates the UPU sets.

So far, there has been no comments regarding whether these issues were raised at the recently concluded UPU Congress in Ethiopia. The Postal Service declined to comment, and the State Department, which handles international affairs for USPS, has yet to respond.