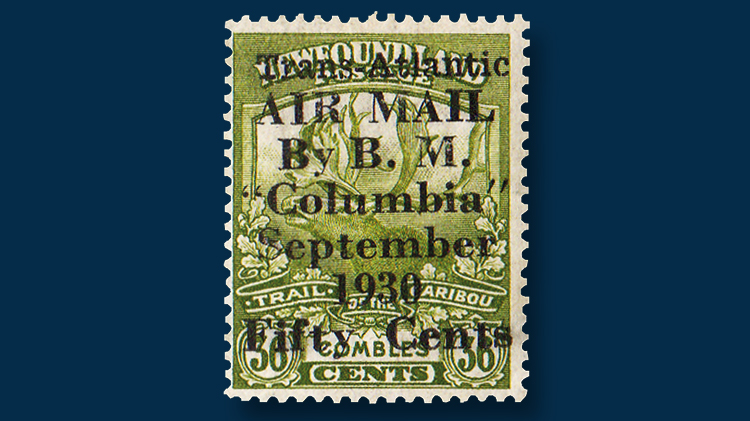 The Sept. 27 Daniel F. Kelleher auction of the Loth family collection includes this unused 1930 Newfoundland airmail with original gum. United States and worldwide collections and accumulations are being offered by the firm Sept. 28-29 in Danbury, Conn.

The Sept. 27-29 public auctions from Daniel F. Kelleher auctions in Danbury, Conn., open with United States and worldwide stamps and collections from the Loth family collection.

The final two days of the sale offer collections, stocks and accumulations of United States, Great Britain and British Commonwealth (Friday), and the world (Saturday).

The 137 lots of United States and U.S. possessions in the Loth auction include a postally used example of the 1911 3¢ deep violet George Washington stamp known as the “Orangeburg” coil (Scott 389).

A limited print run of this scarce stamp was used by Bell Pharmaceutical in Orangeburg, N.Y., to mail samples to potential customers. Described by Kelleher as having “small corner creases at bottom as quite trivial, otherwise Fine,” the stamp is accompanied by a 1996 Philatelic Foundation certificate.

The U.S. material in this sale includes dozens of revenue stamps.

One highlight is a used imperforate $1.30 foreign exchange stamp from the 1863 first issue (Scott R77a) with manuscript cancel.

The stamp is described as having clear to very large margins, a small tear at top and tiny corner margin crease at top left.

An unused 1930 Newfoundland airmail with original gum, the 50¢ on 36¢ Columbia overprint stamp (Scott C5), is featured among the auction’s British Commonwealth material. Described as fine to very fine by the auction house, the stamp is signed A. Diena and accompanied by 2014 Weiss,  2003 Rendon and 1962 Diena certificates.