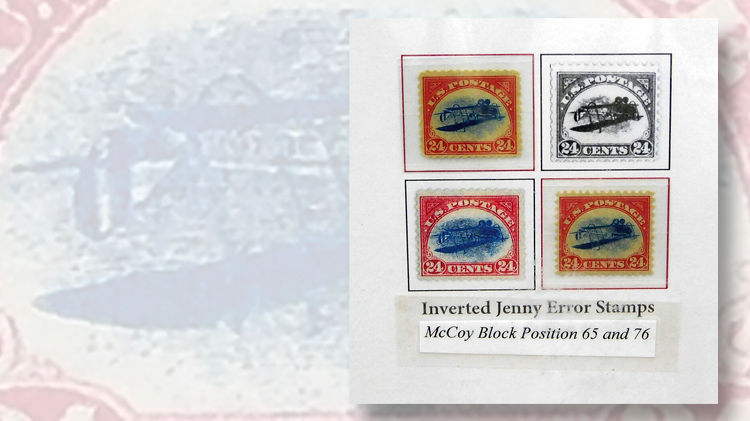 Hope remains for the return of the American Philatelic Research Library’s 1918 Jenny Invert error stamp that has been missing more than 60 years. This stamp, position 66 from the only known error sheet of 100, was part of the McCoy block stolen in 1955.

The hope was raised after another example of the famous airmail error stamp, position 49, recently turned up after last being recorded 100 years ago. On page 1 of this issue of Linn’s, editor Michael Baadke reports on the rediscovery of the position 49 stamp.

Also in response to the news of this stamp’s reemergence, an article titled “One Down, One More to Go” was posted on the American Philatelic Society’s blog. In this online post, collectors were reminded of the $60,000 reward offered for the still-missing position 66 stamp.

“In 2014, the American Philatelic Research Library offered a $10,000 reward for information leading to the recovery of the last two purloined airmail errors, and prominent second-generation dealer and stamp hobby promoter Donald Sundman, president of Mystic Stamp Co., handsomely topped it with a reward of $50,000 for each stamp,” the author of the blog post wrote.

“Now only one of these rare errors remains undiscovered: No. 66. Who will be the fortunate philatelist to find this last upside-down Jenny and claim the reward? Could it be … you?”