Push for Aretha Franklin stamp made at funeral 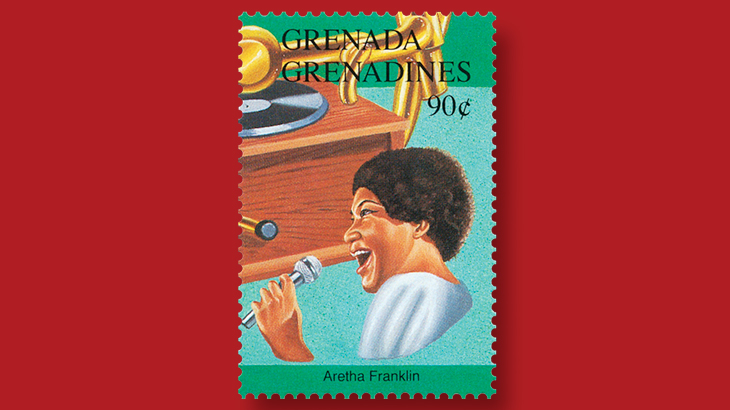 This Grenada Grenadines 90¢ Aretha Franklin stamp (Scott 1501g) was issued in 1992, part of a set honoring Grammy award winners. Fans are calling for the United States Postal Service to issue a stamp honoring the singer who died in August.

A suggestion by a former member of the Detroit City Council has quickly grown into a national campaign to secure a United States postage stamp for the late “Queen of Soul” Aretha Franklin (1942-2018).

The Rev. JoAnn Watson, a former council member, made the suggestion during the Aug. 31 funeral for Franklin at the Greater Grace Temple in Detroit.

“I believe that the federal government would do well to have a postage stamp honoring our queen Aretha Franklin,” she said to great applause from the crowded church.

The campaign immediately took off on social media including Twitter, according to news accounts of the ceremony.

Whoopi Goldberg, a co-host of the daily television show The View, backed the campaign on the show Sept. 4.

“Aretha Franklin needs to be on a stamp, an American stamp,” Goldberg said.

She called on the program’s viewers to write the Citizens’ Stamp Advisory Committee urging it to endorse the stamp.

“I’m asking you to flood them,” she said on the ABC show.

Goldberg said that the postage stamp and a resumption of providing bottled water for residents of Flint, Mich., were two requests that friends of the singer relayed from her deathbed.

A U.S. Postal Service spokesman told Linn’s the agency was aware of the campaign, but noted that current stamp rules require an individual, other than a former U.S. president, to be dead for three years before they are considered for a stamp.

If that guideline is followed, the earliest a Franklin stamp would be issued would be in 2021.

Franklin died Aug. 16 from pancreatic cancer at the age of 76.

The New York Times called her “one of the unimpeachable stars of American music.” She was a music icon whose fans will press the Postal Service to act quickly on their request.