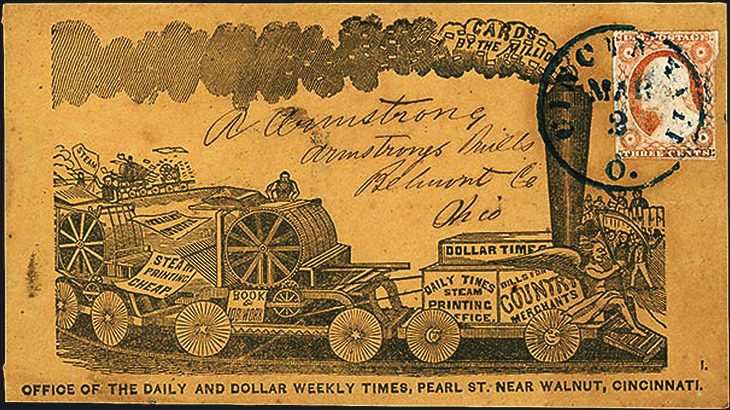 A special Schuyler Rumsey auction scheduled for Sunday features more than 840 lots of advertising covers, including this whimsical allover illustrated design of a locomotive created from the components of a printing press. 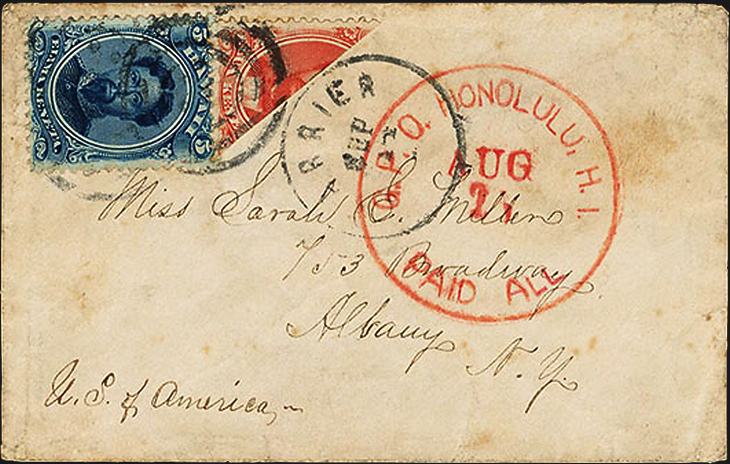 An 1870 cover mailed from Hawaii to Albany, N.Y., franked with a diagonally bisected 1864 2¢ rose vermilion stamp in combination with the 1866 5¢ blue stamp to pay the 6¢ rate. The cover will be offered during the Schuyler Rumsey auction at the Oct. 12-14
Previous
Next

The Rumsey auctions at the show are organized in two catalogs. The first, extending over all three days of the show, is for the Sescal general sale and includes a significant run of United States postal history, along with U.S. stamps (with postmasters’ provisionals and back-of-the-book), Civil War and Confederate States, U.S. possessions, and U.S. and worldwide collections.

A used example of the 1911 3¢ deep violet George Washington stamp known as the Orangeburg coil is offered among the 20th-century material.

This stamp was struck with a wavy line machine cancel, and is “attractively centered for this notoriously off-centered issue with design centered to top yet well clear, rich deep color, small usual flaws with tiny unobtrusive repair,” according to Rumsey.

Only a small supply of these stamps was issued by the Post Office Department and used by Bell Pharmaceutical in Orange-burg, N.Y., to mail samples to potential customers.

A used single Orangeburg coil in the grade of fine is valued at $10,000 in the Scott Specialized Catalogue of United States Stamps and Covers (with the value printed in italics to denote an item that can be difficult to value accurately).

The example in this sale is accompanied by certificates from the Philatelic Foundation (1995) and Professional Stamp Experts (2005).

Among the stamps and covers for U.S. possessions is an 1870 cover from Hawaii to Albany, N.Y., franked with the 1866 5¢ blue King Kamehameha V stamp (Scott 32) and a diagonally bisected 1864 2¢ rose vermilion King Kamehameha IV stamp (31b).

“Mail exchanged between Hawaii and the United States was greatly simplified by the Postal Convention signed May 4, 1870, effective July 1, 1870, which established the 6¢ single-letter rate to the United States,” Rumsey explains. “The 6¢ stamps were not available until late Spring 1871, and so the rate was made up using three 2¢ stamps. As the supply of 2¢ stamps dwindled, the post office permitted some bisects to be used with 5¢ stamps for the 6¢ rate.”

Scott 31b, “Half used as 1¢ on cover with #32,” is valued at $18,000 in the Scott U.S. Specialized catalog, again with the value in italics. This cover has a 2015 Philatelic Foundation certificate and is identified as ex-Peters.

Rumsey previously offered the Gary Peters collection of Hawaii in 2016.

Some 160 additional lots of Hawaii stamps and postal history are offered in the upcoming auction, including town markings, picture postcards, postal stationery and more.

On the last day of the show, collections are the auction focus, with many accumulations of U.S. and worldwide material available.

In the specialized catalog for the advertising covers, Rumsey remarks: “The Western Express section is one of strongest we have had the pleasure of offering with 14 Pacific Union and 60 Wells Fargo designs. Topics range from Agricultural, Cameos, Expositions, Railroad, Tobacco to Tools and Hardware. A significant group of Spanish American War patriotics and Confederate States are present.”

Among the highlights of this sale is a buff cover mailed within Ohio, from Cincinnati to Armstrong Mills, franked with the 1851 3¢ dull red Washington stamp (Scott 11A) tied by a bold blue Cincinnati circular datestamp.

The range of cover designs and subjects in this sale provides much for the collector to choose from.

Both catalogs for the Rumsey sale at Sescal can be found online at www.rumseyauctions.com, with online bidding options available.