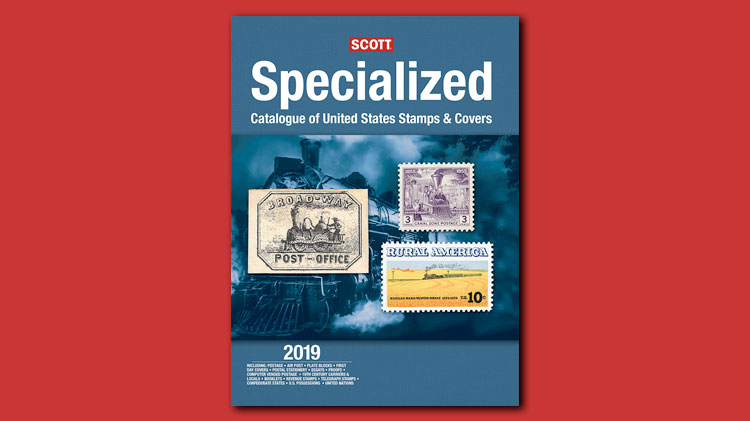 Before we turn our attention to the many value changes and editorial enhancements made in this 2019 Scott Specialized Catalogue of United States Stamps and Covers, the Scott editors salute Scott editor emeritus James E. Kloetzel for working tirelessly on the thousands of value changes and hundreds of editorial changes. He and the rest of the Scott editors have been busy adding and expanding listings and making significant improvements throughout the catalog. Special thanks to Scott editor Charles Snee for leading this colossal project from the home office in Sidney, Ohio.

Unlike in the 2018 U.S. Specialized catalog, where the large number of lowered values for stamps in very fine condition was the story, the biggest story this year are the editorial enhancements to the catalog.

Because of the significant number of changes made to the 2018 catalog, the total number of value changes is somewhat fewer than normally seen. Value changes present a mixed picture this year. Stamps that see lower values include Scott 1 and 2. Scott 1 slides downward slightly, from $6,500 unused and $375 used in Vol. 1A of the 2019 Scott Standard Postage Stamp Catalogue, to $6,000 unused and $350 used, respectively, in the 2019 U.S. Specialized catalog. The value for Scott 2 moves downward in used condition, from $800 to $775. Interestingly, the reproductions of these two stamps (Nos. 3 and 4) jump in value, from $850 unused and $1,050 to $900 and $1,100, respectively. These reproductions were not valid for postal use.

Some strength is seen in the values for unused lower denominations of the first Bureau of Engraving and Printing issues and a few of the 1902-03 definitive stamps. Of great interest is the way the market has responded to recently published census information concerning Scott 596, the 1923 1¢ green rotary press sheet stamp. The value for a sound, fine stamp with machine cancel soars to $200,000, from $150,000, and the stamp precanceled moves upward to $150,000, from $130,000.

Also featured in this edition of the Scott U.S. Specialized catalog is the 23rd edition of the Scott Stamp Values: U.S. Specialized by Grade. The supplement can be easily located in this catalog by the yellow-tipped pages. Scott Stamp Values lists values for sound stamps in eight different grades. Numerical grades are assigned to the verbal grades commonly used.

What editorial enhancements have been made?

Many editorial enhancements and improvements have been made in the 2019 U.S. Specialized catalog. These include comprehensive additions to the many footnotes concerning uncut press sheets of the die-cut convertible (double-sided) booklet panes of 20, which yield imperforate-between pairs plus cross-gutter blocks of four imperforate within. These interesting varieties are now listed and valued in the footnotes.

Collectors of modern errors will be pleased to see the addition of 10 new listings. One of the more intriguing is the 59¢ James Michener with blue and yellow omitted, which enters the 2019 U.S. Specialized catalog as Scott 3427Ad. This error was discovered on a pane of 20 Michener stamps that have the blue, magenta and yellow omitted (3427Ac).

The imperforate 1913 1¢ green George Washington booklet pane of six, Scott 424e, has been deleted from the catalog. An editor’s note explains why this item has been deleted. The note reads, “Research has proven beyond doubt that all examples of the previously listed No. 424e, booklet pane of 6, imperforate and without gum, are unissued fabrications made from an ungummed press sheet on stamp paper once undoubtedly housed in the Smithsonian philatelic collection.”

The Test Stamps and Test Booklets sections have been thoroughly reviewed, and a plethora of corrections and additions have been made, including the addition of 16 new major and minor listings. Numerous illustrations also have been added or replaced. Specialists in these areas are encouraged to review carefully these sections.

Speaking of counterfeits, there are seven new listings in the Postal Counterfeits section. For the most part, these are very convincing knock-offs of the genuine stamps. Detailed footnotes explain how to differentiate between the real and the bogus. And there will be more to list next year. Shortly after our editorial deadline for the 2019 edition expired, two new postal counterfeits came to the attention of the Scott editors.

In the Registry Exchange Labels section, new quantities are reported for six cities, and the listings for Naco, Ariz., have been reorganized. No gum listings have been added to the 1879 postage due special printings (Scott J8-J14). A small number of modern booklets with scarcer plate numbers have been given separate listings, to distinguish their higher catalog values.

The Personal Computer Postage (1CVP) section has been expanded to include computer-vended Official stamps. These new listings may be found at the end of the section, immediately preceding computer-vended postage test stamps.

Earliest-documented use dates have been added for the 1853-55 Nesbitt stamped envelopes (Scott U1-U18a). This valuable new information is presented in a footnote following the listings for these envelopes. More than a dozen cut cancel listings have been added in the Revenue Stamps section.

Two Special Feature articles in the 2019 Scott U.S. Specialized catalog explain significant listing changes in two back of the book sections of the catalog: Confederate States of America General Issues and Puerto Rico.

The first article carries the byline of well-known dealer, researcher and author Patricia Kaufmann, who speaks with first-hand knowledge and logic concerning original gum on Confederate States of America stamps. This article explains and announces a change in Scott listing policy in valuing almost all the Confederate stamps in unused condition. Please read this article and the rewritten notes and listings in this catalog section to fully grasp this change in valuing philosophy and practice.

The second article, by respected dealer, collector and author Bill DiPaolo, deals with the controversial subject of the unused 1898 5¢ Ponce, Puerto Rico stamp, Scott 200. Again, this is an article that should be studied carefully, because it explains in some detail the reasons the Scott editors have decided to delist this well-known stamp, which was not listed for decades after its supposed issuance, and is now delisted, with explanatory notes.