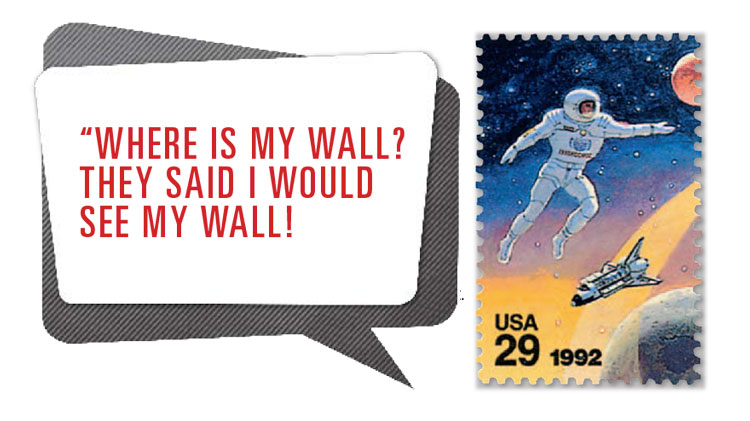 Space Accomplishments commemorative stamp showing a Russian cosmonaut. The winner of the nonphilatelic part of the contest is Michael Schwartz of Raleigh, N.C., who saw President Trump in the cosmonaut suit.

Many Linn’s readers had the Mueller Russia investigation in mind as they thought about the August cartoon caption contest featuring the 1992 29¢ Space Accomplishments stamp of a Russian cosmonaut (Scott 2631).

Thomas McLaughlin, by email, suggested, “May I give you a hand with your elections?”

Donald Kavanagh of Fort Mohave, Ariz., took another approach. He has the panicky cosmonaut saying, “Comrades, don’t leave me out here. I’m sorry I hacked your computers!”

Other entries had a sports theme, focusing on the moon’s resemblance to a ball in the stamp’s design.

Peter Daniels of Jersey City, N.J., offers, “See? I told you volleyball wouldn’t work in Outer Space,” while Rick Howell proposes, “Not even Michael Jordan can top this shot!”

The Russian space dog who flew in Sputnik 2 in 1957 made an appearance in several entries.

Representing this group is Kenny Moore of Rocklin, Calif., with “Laika, nyet! No chasing UFOs.”

The nonphilatelic line winner for this contest puts President Trump in the cosmonaut suit. This entry from Michael Schwartz of Raleigh, N.C., is shown above.

The philatelic side of the contest was won by Dolores Chiaramonte of Valley Stream, N.Y., who has the cosmonaut saying, “I’m glad this is not a ‘Forever’ stamp. At some point I’d like to get back to Earth!”

Both winners will receive a 13-week extension of their Linn’s subscription.

“And they say New York City is a tough place to catch a cab!” from David Vikan of Dickinson, N.D.

“My English is not very good. I said I wanted to fill an empty space in my stamp album,” by Warren Rooney of Bakersfield, Calif.

“Look at me — I’m dancing like Baryshnikov!” from Dave Schwartz of Commack, N.Y.

“And to my left, the moon!” by Ted Feldstein of Doylestown, Pa.

“What’s the correct franking for space mail?” by Jim Hering of Marion, Ohio.

The next cartoon caption contest will be announced in the Oct. 8 issue of Linn’s.