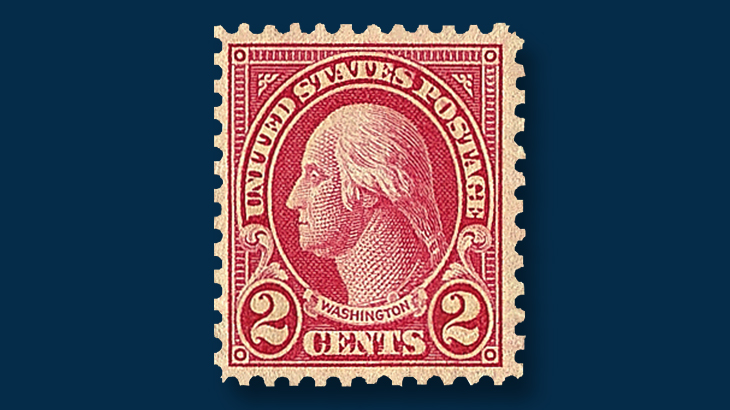 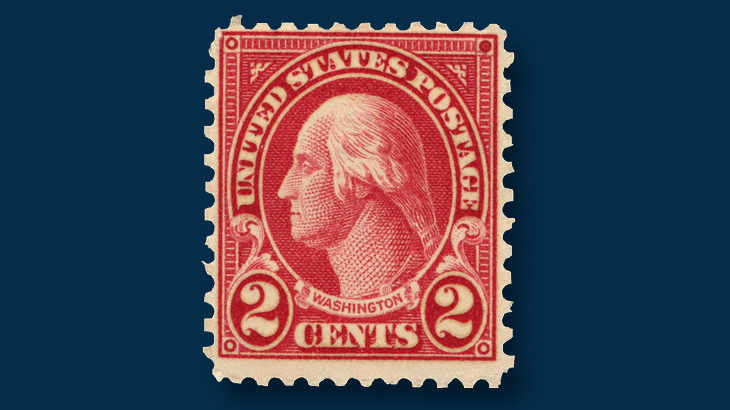 Figure 1. Nicknamed “The Taunton Mystery” stamp, this example of the 1926 2¢ carmine Washington type 1 (Scott 634) has a filled-in upper right circle. Are there more examples in the philatelic community?
Previous
Next

It is not often we have a nearly 80-year-old mystery to puzzle over, but the stamp shown in Figure 1 is just such an item. Figure 2 shows a normal version of this stamp, the 1926 2¢ carmine Washington type 1 (Scott 634).

The mystery stamp came to me with an April 19, 1955, letter addressed to “Dear Doc”, and signed by a gentleman named Bob Vanderwarker. The letter reads: “Sorry for the long delay in sending you a specimen of ‘The Taunton Mystery’ stamp. I put these away for safe keeping and when I went to send you one I couldn’t find them. I finally found them and here is a copy. You will note the small circle in the upper right corner is solid color instead of a white center as are the circles in the other corners.

“These stamps are from electric eye plates, numbers unknown. They were on sale at the Taunton P.O. [post office] in August-September 1940. The stamp is Scott’s No. 634. I have covers dated in both months.

“The local rate at this time was 2¢ and thus most stamps were probably used for local mail. No doubt covers can still be found. A large proportion of them were probably destroyed.

“A write-up on the stamp appeared in Max Johl’s column in Stamps Magazine for Nov. 30, 1940. No satisfactory explanation has been found. It is quite certain it is not a plate defect.

“The best explanation is that the stamps were planted (after marking) in the Taunton P.O. by Postal Inspectors. Why is the question. At least it’s an interesting item.”

Johl’s write-up in Stamps Magazine is useful, but apparently drew no response from the readers, so his suppositions (with which I would agree) stand as the current state of research. Here are his comments, excerpted from his article:

“We are all familiar with relief breaks where part of the design is missing or where the piece that is broken appears in another part of the design (the various stages of the 5¢ Walloon Broken Circle is a good example), but here is a relief variety where something was added to the relief with no evidence as to its being a piece missing from somewhere else in the design.

“The stamps were bought in a post office which had torn off the plate numbers and it is not known what plates these came from. They did, however, contain the electric [eye] markings and this should greatly facilitate the finding of the plate number. Who can give us the plate number or numbers, as this might quite likely have been on several plates all made with the same relief. It is quite likely that some foreign substance adhered to the transfer roll and in filling this circle caused it to make a solid circle in the plate.

“Mr. Vanderwarker showed this to others who expressed the belief that the circles were ‘filled in after the stamps had left the Bureau.’ We rather doubt it. Stamp clerks generally have other things to do than ‘fix up’ 15-20 sheets. Who will help us complete this story?”