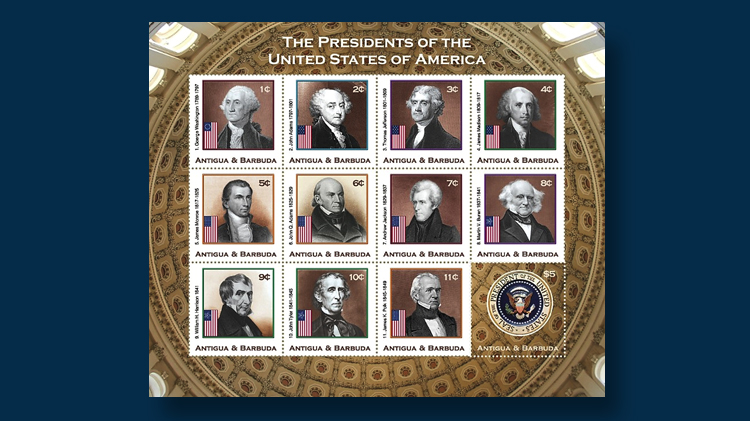 The island nation of Antigua and Barbuda is commemorating all 45 United States Presidents on new postage stamps. The first pane of 12 includes 1¢ through 11¢ stamps showing the first 11 presidents and a $5 stamp with the presidential seal.

All 45 United States presidents are being honored on stamps from the Caribbean nation of Antigua and Barbuda. According to an announcement from the new-issue agency Inter-Governmental Philatelic Corp., the postal authority of Antigua and Barbuda will release the stamps sometime later this year in four panes of 12 stamps each.

The face value of each stamp will correspond to the order of presidency. For example, George Washington is honored on a 1¢ stamp and Donald Trump on a 45¢ stamp.

The presidents also are presented in order on the stamp panes: Washington through James K. Polk on the first pane, which also includes a $5 stamp featuring the presidential seal; Zachary Taylor through Grover Cleveland and a $4 stamp showing the White House on the second pane; Benjamin Harrison through Harry Truman and a $3 stamp depicting the exterior of the U.S. Capitol dome on the third pane; and Dwight Eisenhower through Trump on the fourth pane.

In addition to including a portrait of the president, each stamp depicts a small image of the flag as it appeared during his administration in the lower left corner.

The IGPC Art Department designed the stamps. They were printed by offset lithography.

In announcing the stamps, IGPC said that U.S. presidents “have been honored on postage stamps by international postal administrations for decades. Their illustrious titles and power comes with great awe and admiration as well as the ambition to promote world peace for all of mankind.”

The press release compared the Antigua and Barbuda issue to Grenada’s U.S. Presidents set released July 16, 2007, in three panes of 15 (Scott 3651-3653). “Antigua and Barbuda, like Grenada, has held friendly relations with the United States since their independence from the UK in the mid 1900s,” IGPC said.