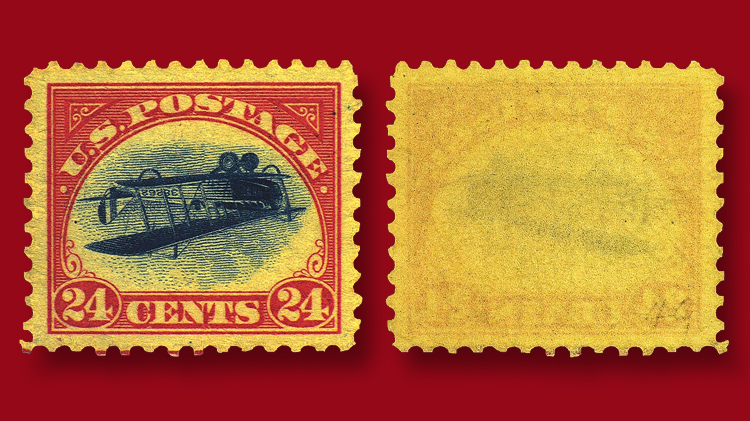 Out of sight for 100 years, this Jenny Invert error stamp (shown front and back) surfaced recently and was certified as genuine by the Philatelic Foundation. The small number 49, indicating the stamp’s original position on the discovery pane, can be seen faintly penciled on the back in the lower right corner. 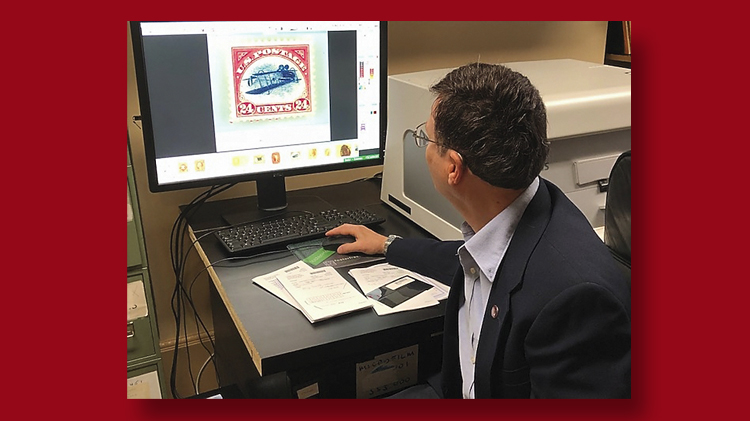 The Jenny Invert stamp was submitted to the Philatelic Foundation for authentication by the Chicago-area family that has held it for three generations. Experts examined the stamp and certified it as genuine. 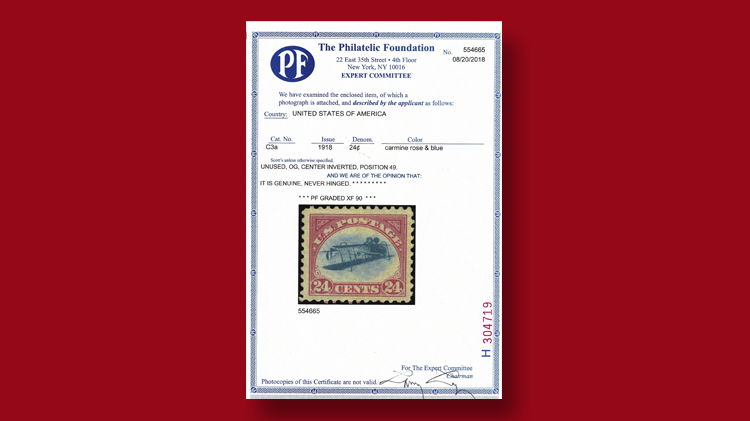 The Philatelic Foundation certificate dated Aug. 20, 2018, describes the Jenny Invert stamp as unused with original gum from position 49, genuine and never-hinged, and assigns a grade of extremely fine 90.
Previous
Next

The experts at the Philatelic Foundation in New York City have examined and certified as genuine the Jenny Invert airmail error stamp from position 49.

For the past century, the whereabouts of this specific stamp has been a mystery.

Shortly after the sheet of 100 Jenny errors was purchased by collector William T. Robey in 1918 and later separated into blocks and singles, the next-to-last stamp in the fifth horizontal row — position 49 as collectors count them out — seemingly dropped out of sight.

The Jenny Invert is the most famous United States stamp error. The 24¢ airmail stamp first placed on sale May 13, 1918, normally shows a blue Curtis “Jenny” biplane flying upright within a carmine rose frame, but the 100 stamps in the error pane — the only one ever discovered — show the plane printed upside down.

Keenly aware that stamp errors often carry premium value, Robey quickly negotiated with stamp dealer Eugene Klein and sold him the entire pane for $15,000, a tidy profit considering the 29-year-old collector had paid $24 for it only days earlier at a Washington, D.C., post office window.

With an insight into the historic ramifications of the find, Klein had used a pencil to carefully number the position of each error stamp on its back before the process of separating them began. A few of those numbers have since been removed (in at least one case to disguise the identity of a stolen stamp), but the stamp from position 49 still bears its original two-digit marking.

Students of U.S. classic stamps have kept track of the auctions in which the various Jenny Inverts have been sold, and when possible, have noted the names of the proud stamp owners.

These historical records and images of all the Jenny Invert stamps are carefully compiled on https://invertedjenny.com, a reference website created and maintained by Robert A. Siegel Auction Galleries.

Since the website’s launch in 2016, the spot where the position 49 stamp should be pictured has shown nothing but a blank black rectangle.

There’s never been a picture available of the stamp until now, and no record of any later transactions. Siegel’s records have only been able to note that the stamp passed from Robey to Klein to Green.

Records of the position 49 stamp come to an abrupt end after May 21, 1918, when Green bought them all.

No one knew where it went.

Today there are other stamps from the pane whose whereabouts are known only to their owners, but none of those have been AWOL for a century.

The stamp from position 66 was stolen from an American Philatelic Society stamp exhibition in 1955 when it was the upper right stamp in a block of four. The stamps were separated after the theft and eventually recovered one by one, with the exception of the still-missing position 66.

An anonymous buyer took home the position 16 stamp in a 1957 Harmer, Rooke and Co. auction, according to the Siegel records. It was certified genuine in 1963, but more than six decades after it was last recorded in a sale, its whereabouts and the stamp’s current owner remain a mystery.

The Jenny Invert from position 79 was also out of sight since 1918 until was sold last year by Leslie Hindman Auctioneers.

So where has the position 49 stamp been for all these years?

According to the Philatelic Foundation, the stamp has been passed down through three generations of a Chicago-area family whose members prefer not to publicly disclose their identities.

However, the family reports that the valuable stamp has spent most of its life in a safe deposit box, untouched by stamp hinges and protected from potential damage, including light and environmental fluctuations.

“Because the stamp was never mounted in an album, it is coveted by collectors as a mint, unhinged copy with its original gum. Only six unhinged Jenny Inverts, including this example, are recorded from the original sheet of 100,” the Foundation reports.

“Based on its centering, bright colors, and its pristine gum, the PF awarded the stamp the grade of 90 “XF” meaning extremely fine condition. It is the highest graded Jenny Invert which still remains in mint unhinged condition 100 years after it was issued.”

Condition and grading are important factors when it comes to assessing the error stamp’s value.

According to the U.S. Specialized By Grade values in the 2018 Scott Specialized Catalogue of United States Stamps and Covers, a Jenny Invert stamp grading very fine 80 carries a value of $450,000. No value is given for a stamp grading XF 90, but for XF-SUP 95 (extremely fine-superb), the catalog lists a value of $1.35 million, reflecting the selling price for one outstanding Jenny Invert stamp in a 2016 Robert A. Siegel auction.

The Philatelic Foundation, a not-for-profit educational organization, has issued more than 550,000 certificates of authenticity, including certificates for 86 of the 100 stamps from the Jenny Invert error pane.