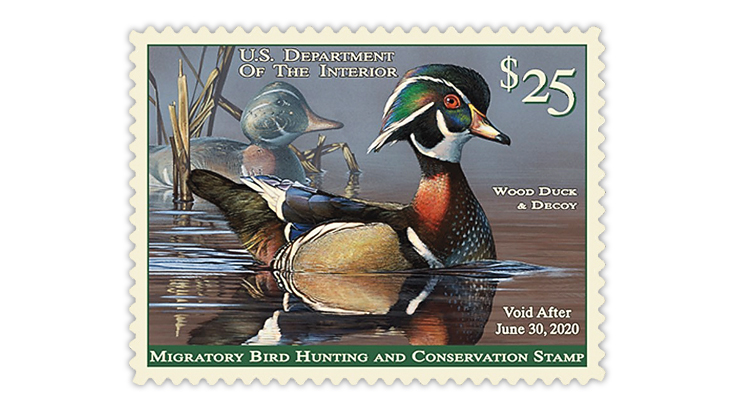 The United States $25 Wood Duck and Decoy federal duck stamp will be issued June 28 with a first-day ceremony in Springfield, Mo.

The 2019 United States Migratory Bird Hunting and Conservation stamp — commonly known as the federal duck stamp — will be issued June 28 in two formats.

The new stamp, which is issued by the Fish and Wildlife Service division of the U.S. Department of the Interior, features a painting by Scot Storm that depicts a male wood duck in the foreground and a carved wooden duck decoy that resembles a male wood duck in the background. The duck and decoy are floating together in marshy water with exposed reeds.

Text is placed within the design in four different areas. A fifth line of text is lettered below the illustration.

Above the decoy head, near the top of the stamp, is printed “U.S. Department of the Interior.” The upper right corner has the $25 denomination, and in smaller letters to the right of the wood duck is the inscription “Wood Duck & Decoy.”

“Void After June 30, 2020” is printed in the lower right corner, and below the vignette is the phrase “Migratory Bird Hunting and Conservation Stamp.”

While the 2018 federal stamp was the 85th issue in the annual series, the first federal duck stamp was issued in 1944, which was 84 years earlier.

Details publicly released this year do not mention a souvenir sheet.

Press sheets for the 2018 federal duck stamp were still available for ordering from USPS Stamp Fulfillment Services as of early June.

Since 1949, the artwork for the federal duck stamp has been chosen in a juried competition, originally in Washington, D.C., but now held at a different location each year and open to the public.

The 2018 federal duck stamp art contest (for the 2019 stamp) was assigned the theme of “Celebrating our Waterfowl Hunting Heritage.” Artists were directed to include an element aligned with that theme in artwork submitted for consideration. In Storm’s painting, the wooden decoy is a hunting element.

The 2019 contest, which will determine the artwork for the 2020 federal duck stamp, will take place Sept. 27-28 at Patuxent Research Refuge in Laurel, Md.

Contest rules and entry information can be found online.

Post offices in the United States will sell the federal duck stamp in the pane of one. The stamps in the pane of 20 will be available only from the Stamp Fulfillment Services mail-order division of the U.S. Postal Service, and Amplex Corporation (beginning June 28).

A first-day ceremony for the new federal duck stamp will take place at 10 a.m. June 28 at the Bass Pro Shop in Springfield, Mo.

The event is free and open to the public.

Storm is expected to attend the ceremony, along with young New York artist Nicole Jeon, whose painting of a male harlequin duck is featured on the 2019 junior duck stamp.

The $5 junior duck stamp, which is being issued at the same event, raises funds for conservation education, including awards and student scholarships.

Although not valid for postage, the federal duck stamp is a popular collectible, illustrated and listed as “hunting permit stamps” in the Scott Specialized Catalogue of United States Stamps and Covers and in Vol. 1A of the Scott Standard Postage Stamp Catalogue.

The funds collected from sales of the stamps raise up to $40 million each year to conserve and protect wetland habitats in the National Wildlife Refuge System, according to the Fish and Wildlife Service.