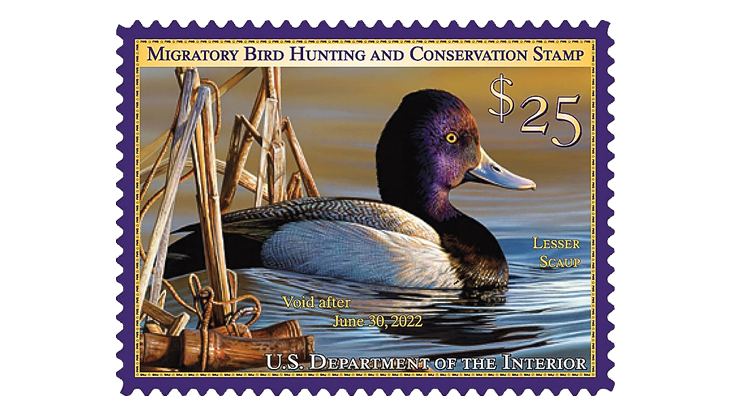 Delaware artist Richard Clifton’s acrylic painting of a single lesser scaup drake is featured on the United States Fish and Wildlife Service’s federal duck stamp that will be issued June 25 in Spanish Fort, Ala.

As the first day of issue gets closer, collectors can find additional details online.

Although not valid for postage, duck stamps are sold by the U.S. Postal Service at post offices (in single-stamp panes only) and through its Stamp Fulfillment Services division in Kansas City, Mo. They are also available at selected national wildlife refuges and sporting goods retailers and from Amplex Corporation.

Similar to last year, the new 2021 stamps are offset printed by Ashton Potter USA Ltd., in two self-adhesive formats: a pane of one and a pane of 20.

The federal duck stamp also serves as “a free pass into any national wildlife refuge that charges an entry fee,” the Fish and Wildlife Service said.

Of 138 entries submitted to the competition held online Sept. 25-26, 2020, seven entries (including Clifton’s) made it to the final round of judging. Eligible species for the 2020 duck stamp contest were the gadwall, brant, cinnamon teal, lesser scaup and red-breasted merganser.

Clifton also took top honors in the 2006 contest, when his painting of a pair of ring-necked ducks was selected to appear on the 2007 $15 duck stamp (Scott RW74).

On the June 25 issue date, a new junior duck stamp also will go on sale. The $5 stamp will picture a pair of hooded mergansers painted by 18-year-old artist Margaret McMullen of Kansas.

Since the duck stamp program was established in 1934, sales of the federal duck stamp to hunters, bird-watchers, outdoor enthusiasts and collectors have raised more than $1 billion to conserve over 6 million acres of habitat for birds and other wildlife and provide countless opportunities for hunting and other wildlife-oriented recreation on public lands in the United States.

Variety on 2016 duck stamp might be worth looking for