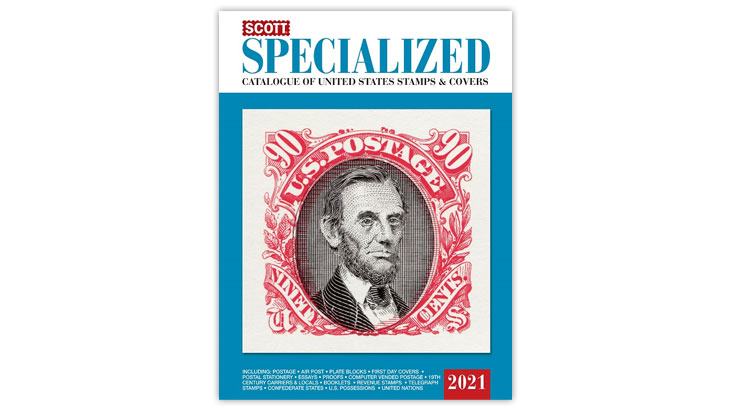 Many important value and editorial changes enhance the 99th edition of the Scott Specialized Catalogue of United States Stamps and Covers.

Before we turn our attention to specific examples, we salute Scott editor emeritus James E. Kloetzel for working tirelessly on the thousands of value changes and hundreds of editorial changes. Kloetzel and the rest of the Scott editors have been busy adding and expanding listings and making significant improvements throughout the catalog. I feel this was a big year for the catalog.

As in the 2020 U.S. Specialized catalog, editorial enhancements to the catalog somewhat overshadow the value changes. Overall, values largely have stabilized at current levels, with dealers reporting active internet sales in line with present values.

Several advisors suggested that no value changes were needed this year, but every year presents us with various offerings that have not appeared in the marketplace in many previous years. And in these cases, new, mostly higher values are seen.

A good example this year was the appearance at auction of the 1857 3¢ dull red George Washington stamp (Scott 26Af) in a unique horizontal strip of three, imperf vertically. Previously valued at $14,500, it has now almost doubled in value, to $27,000.

Likewise, sales of important collections of sanitary fair stamps and encased postage resulted in 19 and 37 value changes, respectively, which is many more than are usually seen in a single year.

The listings of Great Americans series of definitive stamps from the 1980s and 1990s were enhanced this year with the addition of cover values for all of the stamps. Some of the stamps paid a couple of different rates, and values are provided for those examples, too. A Special Feature by collector and specialist Roger Brody accompanies those listings.

This edition of the catalog also embarks on a large project of adding pane values for most U.S. stamp issues. For this catalog, the Scott editors started at the present day and worked backward to 1996. Pane values were already provided for smaller panes of 24 or fewer stamps, but anything higher (panes of 40, 50 or 100, for example), now have a value given.

Collectors of the Flag Over Porch stamp issue of the mid-1990s should take a close look at that section and read the accompanying article by coil stamp specialist John Himes. The Special Feature article looks closely at the different die cut types that exist for some of the self-adhesive coil stamps, some with notable values for the different varieties. While the listings themselves don’t go into this depth of detail and value the most common die cut type, this Special Feature will help collectors possibly uncover rarities lurking in their collections. I am certain the coil stamp community would be thrilled to hear about any finds so these collectors can update their census details of some of the scarcer die cut types.

Another project started with this year’s catalog relates to adding images for stamps that haven’t typically been shown in the catalog before. For stamps from 1996 to date that have similar designs but different dates or denominations (Purple Heart, Hanukkah, and so on), the stamp is now pictured. For now, all of the varieties of Flag stamps have not been added, but we welcome feedback on what we have done so far before we continue with earlier stamps. The Definitive Identifier in the front of the catalog will continue to provide a resource that groups all of these similar design types in one spot.

The Essay section of the U.S. Specialized catalog has seen important additions in recent years, but the 2021 catalog contains arguably the most important additions, revisions, corrections and new illustrations in the classic era since the section was added to the catalog in 1992. Many of these changes are outlined in a Special Feature article by Jan Hofmeyr, with comments from Jim Lee. The Rev. Stephen Knapp was the driving force behind a new and better treatment of the 1903 Schernikow essay reprints. Specialist collectors will want to study the Essay section very carefully this year.

As has become usual, the Test Stamp section is replete with new listings and corrections. This has become a very large and interesting collecting area.

The Christmas Seals section also had a number of changes made, including the addition of designer names for a large number of the seals issued in the last couple of decades.

The 2021 Scott eCatalogs are available online.