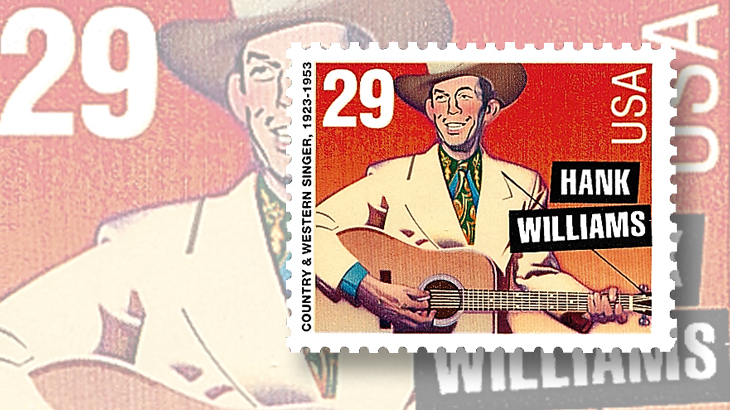 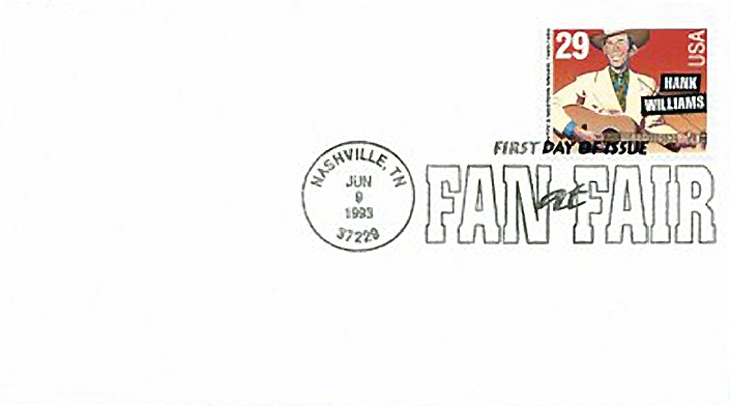 Country music, also known as country and western, is about roots.

When you search for the roots of country music, you don’t have to look much further than Hank Williams, born Hiram King Williams in Alabama in 1923. The son of a railroad worker, he suffered from spina bifida, which caused him intense back pain for most of his life.

Growing up poor in the South during the Depression left its mark. Hard times, a failed marriage, chronic pain, alcoholism, and prescription drug abuse (tied to his back pain) all flowed into his music.

He died in the back seat of his Cadillac en route to a concert in West Virginia. The cause of death was a heart attack brought on by alcoholism and drug abuse. He was 29 years old.

The songs he wrote and sang, the concerts in which he performed, and the music that he recorded are even more influential in today’s country music than they were during his brief lifetime.

The 2016 Scott Specialized Catalogue of United States Stamps and Covers values the stamp perforated gauge 11.2 by 11.5 at $17.50  in mint never-hinged condition and $10 in used condition.

The stamp is readily available in mint condition at Scott catalog value. Used examples are far harder to come by. The souvenir page for the issue (Scott SP1030A) is only known with the stamp perforated gauge 11.2 by 11.5.

First-day covers with the gauge-11.2-by-11.5 variety are very scarce. We can only find two recorded sales of this FDC. An uncacheted FDC with an American Philatelic Society certificate sold at public auction for $200. Several years ago, an FDC with a black and brown Artcraft cachet sold for $30 in an online auction.

If you found an FDC offered, a good retail price would probably be midway between these realizations.

Check your collections, along with dealers’ stocks and accumulations, for unidentified examples lurking there.