3¢ type I Washington is often misidentified 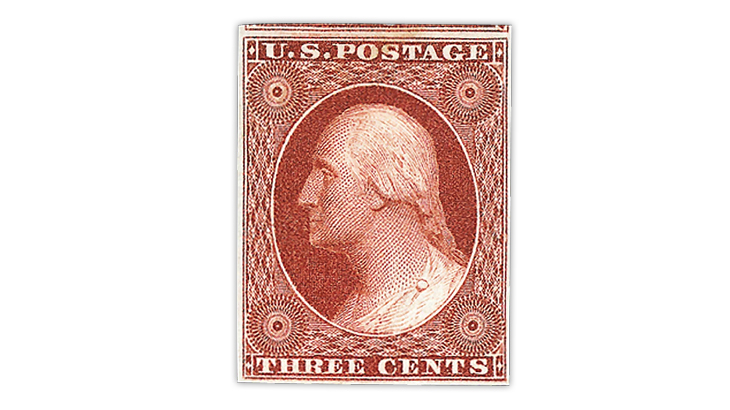 The United States 1851 3¢ orange brown George Washington stamp type I (Scott 10) often is misidentified and missing from most U.S. collections.

Several years ago, the editors of the Scott Specialized Catalogue of United States Stamps and Covers gave major number listings to two types of the stamp: type I (Scott 10) and type II (Scott 10A). See the catalog for details of the two design types.

The Scott U.S. Specialized catalog values Scott 10 at $185 for a used example in very fine grade (four margins). A used, very fine example of Scott 10A is valued at $145. Scott 10 is actually far scarcer than the slight difference in catalog value might lead you to believe.

The type I stamp is the most misidentified stamp in U.S. classics collecting. Nonspecialist collectors and dealers often cannot correctly identify it, being misled by the sharpness of the impression and the color, which can be subjective.

In the thousands of U.S. collections we have examined over the years, the stamp purporting to be Scott 10 almost always turns out to be the more common and less valuable 3¢ dull red George Washington stamp, either Scott 11 or 11A.

Four-margin examples of Scott 10 are hard to come by because there was so little space between the stamps as printed. A four-margin example is a good buy at 80 percent of catalog up to full catalog value depending on the ampleness of the margins and attractiveness of the cancellation.

If you are not a specialist who can positively identify the stamp by plating it, an expert certificate from one of the recognized services is a must. Do not waste your money on a misidentified dull red 3¢ George Washington stamp purporting to be the orange brown stamp.