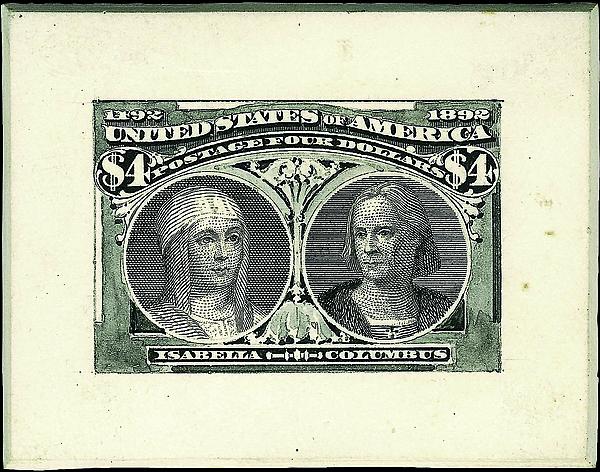 A unique watercolor essay of the $4 Columbian realized $32,200 at Robert A. Siegel Auction Galleries’ auction of the Fekete collection.

The Fekete collection contained a wide assortment of essays and proofs of United States stamps, and anyone interested in the genesis of U.S. postage stamp designs, from early postmasters’ provisionals through 20th-century issues and into the back of the book, would do well to peruse the sale catalog at siegelauctions.com.

One of the loveliest items in the Fekete sale was a watercolor essay (Scott 244-E6) in gray-black for the $4 stamp from the 1893 Columbian series, marking the 400th anniversary of Europeans’ arrival in the New World.

Mounted on a thick, beveled card measuring about 2 inches by 1½ inches, the essay is a composite made up of the partially engraved vignette and lettering and a handpainted proposal for the frame, slightly taller and differing in a few details from the issued stamp.

This unique piece (and one of just three such essays surviving for the dollar-value Columbians) brought $32,200, including the 15 percent buyer’s premium that Siegel adds to all lots.

A fascinating pair of lots showed the famous “Gatun Locks” design error on the 2¢ value of the 1915 Panama-Pacific set, a major U.S. stamp-design gaffe that was headed off in the nick of time and survives only in the form of essays (Scott 398-E2) and die proofs (398-E3b).

The stamp was meant to showcase the engineering marvel that was the newly opened Panama Canal. Photographs sent from Panama proved unsatisfactory as a basis for a stamp design, however, so the Bureau of Engraving and Printing hit upon the idea of photographing a scale model at the War Department in Washington instead.

The stamp was duly completed and printed, and then somebody realized that the scene labeled “Gatun Locks” was actually a model of the Pedro Miguel locks. The error stamps all were destroyed, and a new printing was done with the wording “Panama Canal” (Scott 398).

Only two photographic essays and two small die proofs remain as evidence of the snafu. One of each appeared in the Siegel sale, where they fetched $6,612 and $14,375, respectively. A large die proof reportedly also exists, but its whereabouts are unknown.

Issued U.S. stamps in the sale included Pan-American inverts of 1901. The 2¢ value, with its locomotive chugging along upside down (Scott 295a), is the rarest of the three, with 72 unused and six used examples known. The original gum example in the Siegel sale, like most of its kind, is centered somewhat high. It sold for $26,450.