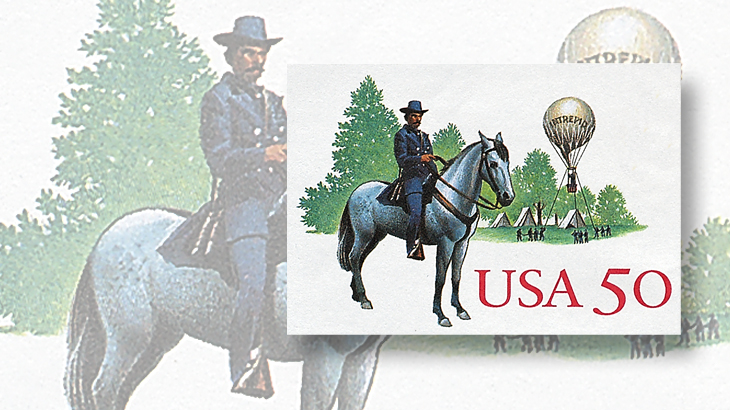 The United States 50¢ Thaddeus Lowe, Balloonist air letter sheet (Scott UC64) is very scarce in used condition and would be a good buy at up to double its 2016 Scott Specialized Catalogue of United States Stamps and Covers value of $10. This letter sheet

Air letter sheets are one of the less well-known types of postal stationery. They differ from postal stationery envelopes in that the letter or message is written on the sheet, which is then folded up in the shape of an envelope for mailing.

Air letter sheets save weight by dispensing with the outer envelope. The United States has issued only a handful of air letter sheets for airmail to foreign destinations.

At the beginning of the Civil War, Lowe recognized the potential value of aerial balloons for military reconnaissance. He was appointed Chief Aeronaut of the Balloon Corps of the U.S. Army. The Balloon Corps’ efforts in the war were largely successful, even though they were not fully appreciated by commanders on the ground.

The 2016 Scott Specialized Catalogue of United States Stamps and Covers values the Thaddeus Lowe air letter sheet at $1.50 in mint condition and at $10 in used condition, with the used value in italics.

Mint examples are plentiful, but genuine in-period, nonphilatelic examples used to foreign destinations are scarcer than hen’s teeth. If you find one on offer at up to double Scott catalog value, it would be an excellent buy.