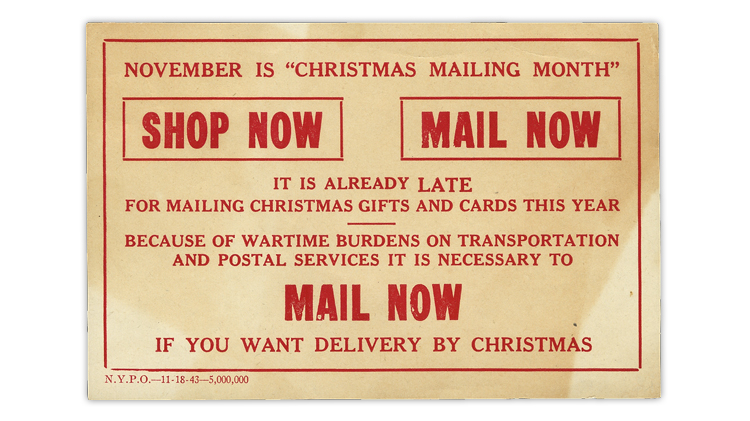 “If you want delivery by Christmas,” “Shop Now” and “Mail Now” are the messages on this mail-early campaign post office notice produced by the New York post office in 1943. It also mentions the impact on postal service of wartime burdens on the means of t

The Postal Service puts a lot of effort into telling us to mail early if we want our Christmas cards and gifts to be delivered before Dec. 25. I have seen wall posters, cancellations, television and internet advertisements, mailings and more with this message.

Before the establishment of the USPS in 1971, its predecessor, the U.S. Post Office Department and local post offices promoted the same message.

An example from the World War II era is pictured nearby. It is headlined “November is Christmas Mailing Month.” The text is in bold red on cream-colored paper. According to the small print at the bottom left, this New York post office notice is dated Nov. 18, 1943, and was printed in a quantity of 5 million.

And it is my guess that a copy was included with the mail of every recipient in the city and associated boroughs. The population of the city in 1940 was about 7.5 million and growing.

The time period made the message that much more urgent. As the notice says: “Because of wartime burdens on transportation and postal services it is necessary to MAIL NOW if you want delivery by Christmas.”

In those days, the fact that the United States was at war was front and center in the minds of our citizens. Now, some 70 years later, our wars are smaller, seemingly remote, and much less on the public mind unless you are in a family with a soldier in a war zone. The post office is still advising early mailing, but any connection to war is muted if present at all.