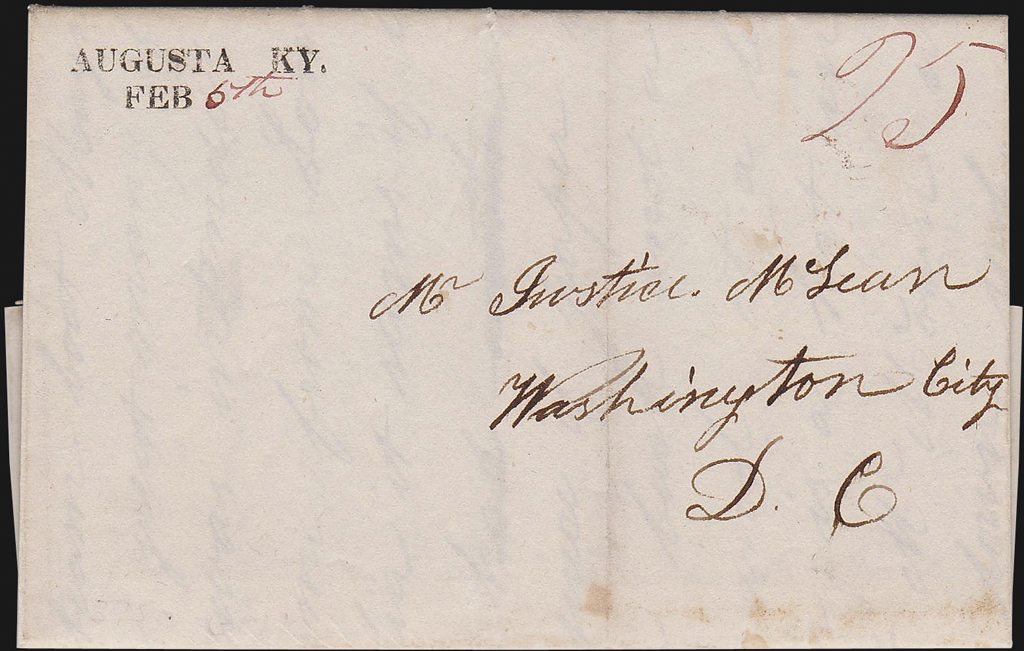 This folded letter traveled more than 400 miles, from Augusta, Ky., to Washington, D.C. It was mailed Feb. 5, 1832 (date inside), so the rate was 25¢. It was not prepaid. The addressee, John McClean, a Supreme Court justice at the time, had to pay the quarter to receive it. 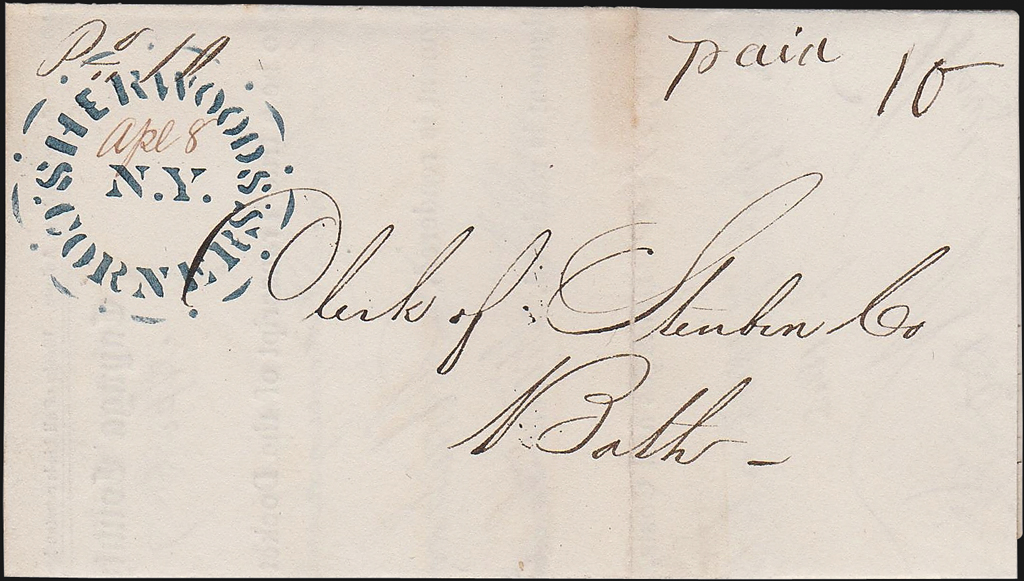 This 1845 cover enclosed a legal document being sent to Bath, the county seat of Steuben County, N.Y. The post office of mailing, at Sherwood Corners, N.Y., used a blue stencil cancel. The sender prepaid this cover: 10¢ for the rate to send a letter 30-80 miles.
Previous
Next

On July 1, 1847, the United States Post Office Department issued its first postage stamps: a 5¢ and a 10¢ stamp. Before that time and for many years thereafter, written communications between individuals were sent without stamps. These are called stampless covers, and either were carried privately by individuals, express companies and carriers, steamboats and ships, or by the post office. In this column I will discuss those handled by the post office.

In the early 1700s, the British Post Office established post roads in its American colonies, over which the mail was carried. When the United States came into being, a new postal system under the new government was formed utilizing these roads and also many of the other facets of the British system.

For a number of years, mail was rated in both British and U.S. colonial currency. Mail could be either prepaid or sent unpaid, with the recipient having to pay the postage.

The Act of March 2, 1799, set postal rates based on distance, with different postage rates for each mileage increment. This system was used with minor variations until 1845, with the exception of the period between Feb. 1, 1815, to March 30, 1816, when a surtax of one-half the given rate was added to the postage on a piece of mail to help pay for the War of 1812.

In 1845, the Post Office Department simplified the rates for regular mail, to 5¢ for mail sent less than 300 miles and 10¢ for mail sent more than 300 miles. Starting July 1, 1851, the mail rate dropped to 3¢ on prepaid and 5¢ on unpaid for distances under 3,000 miles, and to 6¢ prepaid and 10¢ unpaid for greater distances within the United States.

On April 1, 1855, the POD made prepayment of postage on letters mandatory, and by 1860, stampless covers were rarely seen going through the post office, with the exception of soldiers’ mail in the Civil War and mail to and from foreign countries.

Serious collecting of stampless covers is a relatively new activity. Not that many years ago, one could pick stampless covers out of dealers’ shoeboxes at stamp shows for pennies each; collectors wanted covers with stamps on them. Tastes have changed, and these pieces of postal history are now highly collectible.

Interest in the contents of old letters, including those inside stampless covers, is one of the fastest growing areas of postal history. Many times, a piece that appears mundane has contents that make it very desirable. A cover canceled with a common Midwestern town cancel might have originated from an early Western explorer or military expedition, and have interesting and historically important content and value. Even less compelling contents can in some way enhance an otherwise ordinary cover, shedding some light on the sender or recipient.

Many impressive collections have been put together by showing examples of all of the various postal rates, from the inception of the POD to the 1850s. Collections of covers of a region, state, county, city or town can be assembled according to the desires of the collector.

Types of cancellations — stencils, ovals, double circles, straight lines or fancy cancels — can be made into significant showings. Some such collections realize considerable amounts at auctions and private treaty sales. Western cancels and early cancels, for example, can bring thousands of dollars. Times have changed.

I have chosen to show two stampless covers that, although not rare, are good examples for illustrating the interest that some of these covers have. The first, a folded letter, has a straight-line stamped marking of “AUGUSTA KY./FEB 5th” (dated 1832 inside) and is addressed to Mr. Justice McLean at Washington City, D.C., with postage due “25” (cents) in pen in the upper-right corner, for the over-400-miles rate.

The second cover has a blue stencil cancel, “SHERWOOD CORNERS/N.Y.,” and is addressed to the Clerk of Steuben County, Bath (N.Y.). Inside the cancel is the date “Ap(ri)l 8” (1845, from contents), with a manuscript marking “paid 10,” paying the rate for 30-80 miles. It is a legal document and was prepaid.