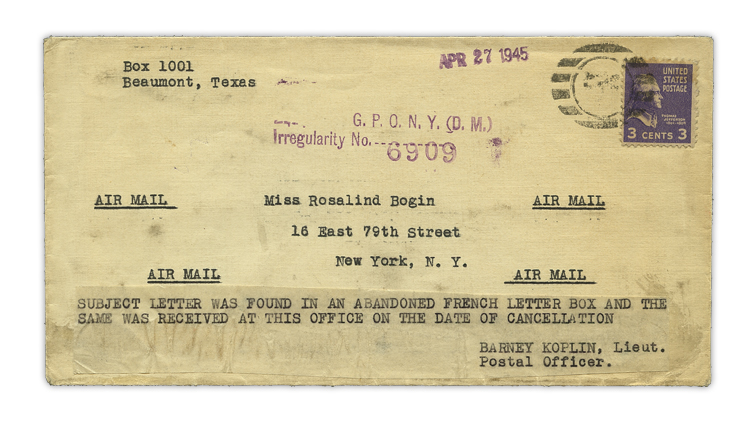 Some things about this World War II-era cover can be determined from its markings and from its content, but not all the questions it raises have answers.

The lure of cover collecting is that any given cover can turn into a challenge if markings on the front or on the back show unusual handling in the sending, transmission or delivery processes.

While almost every example of a specific stamp will be more alike than not, every cover will be different from every other cover.

Shown above is a 3¢ Presidential issue, or Prexie, cover with no cancellation date on the front or back. Off cover, this 1938 3¢ Thomas Jefferson stamp is common and has minimal value. On cover, it can easily soar into the hundreds of dollars.

In this case, the value depends upon the particulars of the cover. Let’s start with the cancellation. It is not of United States origin, but it is impossible to tell where it was applied as the information in the center is unreadable. Perhaps a Linn’s reader will recognize it?

The envelope is marked “Air Mail” four times, but there is not enough postage on it to pay for airmail.

Despite all of this, the return address is in Beaumont, Texas, and the cover is being sent to an address in New York, N.Y.

To really complicate matters, there is a typed message pasted to the bottom front of the cover which reads, “Subject letter was found in an abandoned French letter box and the same was received at this office on the date of cancellation. Barney Koplin, Lieut. Postal Officer.”

Unfortunately, as previously noted, the date in the cancellation is useless.

We would be at a dead end if the contents of the envelope were gone, but fortunately still inside was the stamped envelope addressed to Popular Science magazine in New York City.

In that envelope is a short letter stating that a $1.25 money order is enclosed for a copy of “Just Fishing” by Ray Bergman “as advertised in your September issue of 1941.”

The letter with the envelope addressed to Popular Science is also dated Nov. 4, 1943, and starts off “Dear Rz.,” which matches nicely with the address on our cover. “Rz.” is then instructed to “Please add the name of the ship in the address below my signature on the letter enclosed and mail it to Popular Science together with the money order enclosed. We are not permitted to use the name of a ship in a letter from a foreign port.”

The rest of Katzen’s letter is a series of complaints about not receiving mail. He signed the letter with his signature and “Radio Officer.”

We can take away from this that he was a merchant seaman based in Beaumont, Texas, with his ship in a foreign port. This explains why the envelope has a foreign origin, though how it got into a French letter box in 1943 is left to our imagination.

What we do know is that the French authorities found the cover and turned it over to the U.S. military, which sent it on to the U.S. post office in New York City where it was handled as an irregularity and likely delivered.

It used to be that the Postal Museum of the New York City Post Office kept a register of the postal irregularities it encountered. I was saddened to discover that the gentleman I had previously dealt with at the museum had retired.

A postal official in Washington, D.C., advised that “the historical material formerly at the Postal Museum in the Farley Building in New York was transferred to Washington some years ago.”

The official added that the material had gone to the National Postal Museum of the Smithsonian Institution, where “curators sifted through the material and added some of it to the Museum’s collection.”

And there I hit the wall. Staff at the National Postal Museum tried to find the irregularity register without success.

This fascinating cover tells us something of the fog of war that results in unanswered questions. What ship with an American radio officer visited France in 1943 and where? What happened to the money order, which was not with the cover when I bought it? And how did the cover get from “Rz.” to the philatelic marketplace?

The cover now resides in my collection, laughing at me because I can’t divine its remaining secrets.

Old Man of the Mountain crumbles, but stamps remain