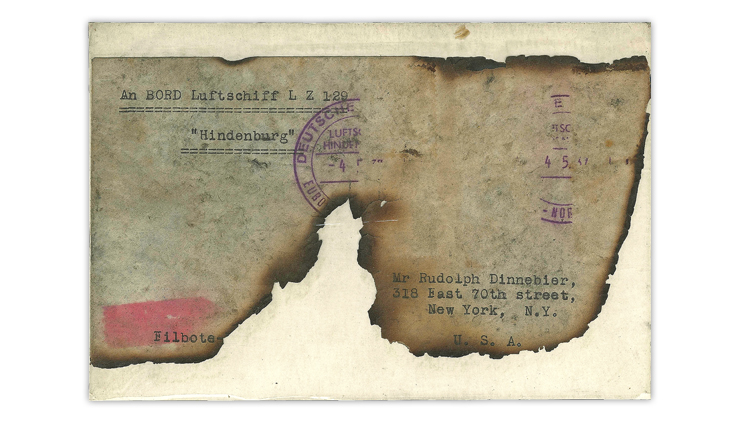 Figure 1. This burned Hindenburg crash cover is one of about 164 known survivors of the May 6, 1937, disaster that resulted in the destruction of the airship as it attempted to dock at Lakehurst Naval Air Station in New Jersey. Image courtesy of Robert A. 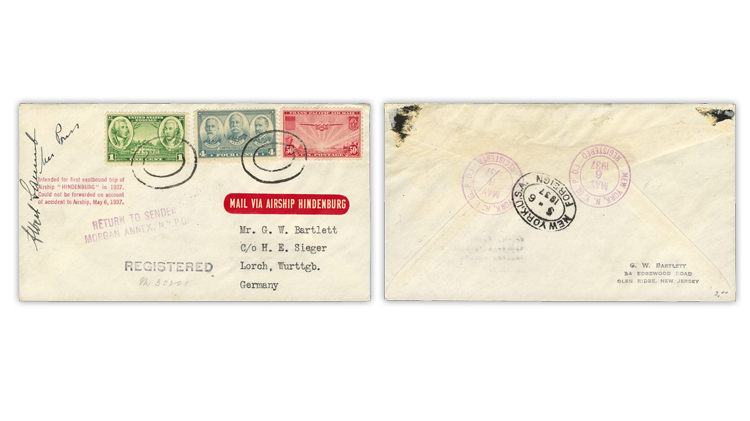 Figure 2. Intended for the return flight of the Hindenburg, this registered cover (shown front and back) was returned to the sender unflown, but with the signatures of the captain and first officer of the airship.
Previous
Next

To obtain a Hindenburg crash cover, such as the one shown in Figure 1, it just takes bidding high enough when an example is offered at auction.

Figure 2 shows a cover I acquired. While it is not a crash cover, it is arguably just as interesting because it represents another part of the story: mail intended for the onward flight that never took place.

This cover was the first such example I have seen, and it was obtained from the Daniel F. Kelleher auction of August 16, 2017.

The German passenger airship Hindenburg had flown from Frankfurt, Germany, on May 3, 1937, on what was supposed to be a round-trip commercial flight between Europe and the United States.

At 7:25 p.m. May 6, the airship caught fire while attempting to dock with the mooring mast at the Lakehurst Naval Air Station in New Jersey.

The Hindenburg was destroyed in 34 seconds, killing 35 of the 97 people on board and one worker on the ground. The exact cause of the accident remains unknown though there is no shortage of theories.

Approximately 164 pieces of mail addressed to the United States were salvaged, as were about 175 pieces of uncanceled mail that were sent from Europe, intended as souvenirs of the round trip.

But what happened to the mail that was sent from the United States intended for the return flight? The registered cover addressed to Germany shown in Figure 2 tells us at least part of the story.

As was normal for registered mail, this cover has mute cancels on the front. On the reverse, it has May 6, 1937, New York G.P.O. and foreign mail section postmarks.

The cover bears a handstamped “Return to Sender / Morgan Annex, N.Y.P.O.” on the front. It also has a neatly placed message in red that reads: “Intended for first eastbound trip of Airship “Hindenburg” in 1937. Could not be forwarded on account of accident to Airship, May 6, 1937.” That message was likely added later, probably not by the post office.

Cheryl Ganz, who specializes in zeppelin memorabilia and mail worldwide, told me that the red message is not on all the returned covers she has seen.

The cover was signed by Max Pruss, who captained the inbound flight, and Albert Sammt, who was the first officer, using fountain pens, an argument for the signatures being genuine. I know nothing of how the autographs came to be on the cover.

Both Pruss and Sammt were seriously burned in the disaster and hospitalized for a lengthy period, so the autographs may have been obtained during their hospitalization.

I don’t know how much mail was returned unsent. Ganz suggests that there may have been 10,000 pieces or more. She said she has seen covers intended for the return flight with no marks, with a variety of return-to-sender marks, with return label attached, and with the aforementioned red rubber stamp cachet.

However, because of the autographs, Ganz rates this cover as rare, with a small handful existing at most.

The stamp hobby legend found on a ‘Hindenburg’ cinderella cover