A magnifier and stamp friends can save you money 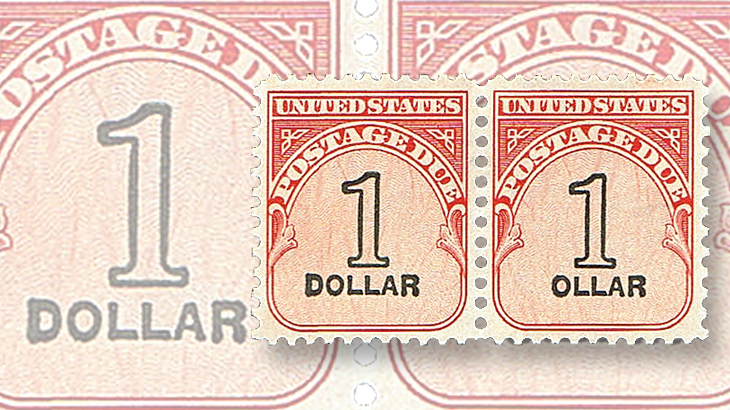 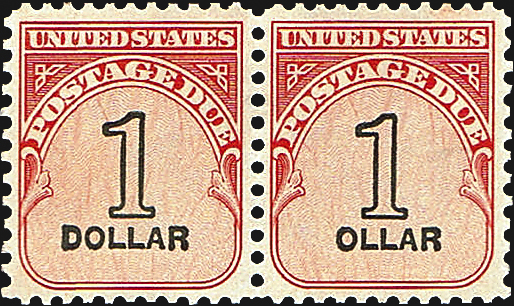 Look closely at this pair of United States 1959 postage due stamps and you will see what looks like a major flaw, with the “D” missing from “Dollar.” On inspection under 30-power magnification, a few dots of the missing black “D” on the right-hand stamp are present. 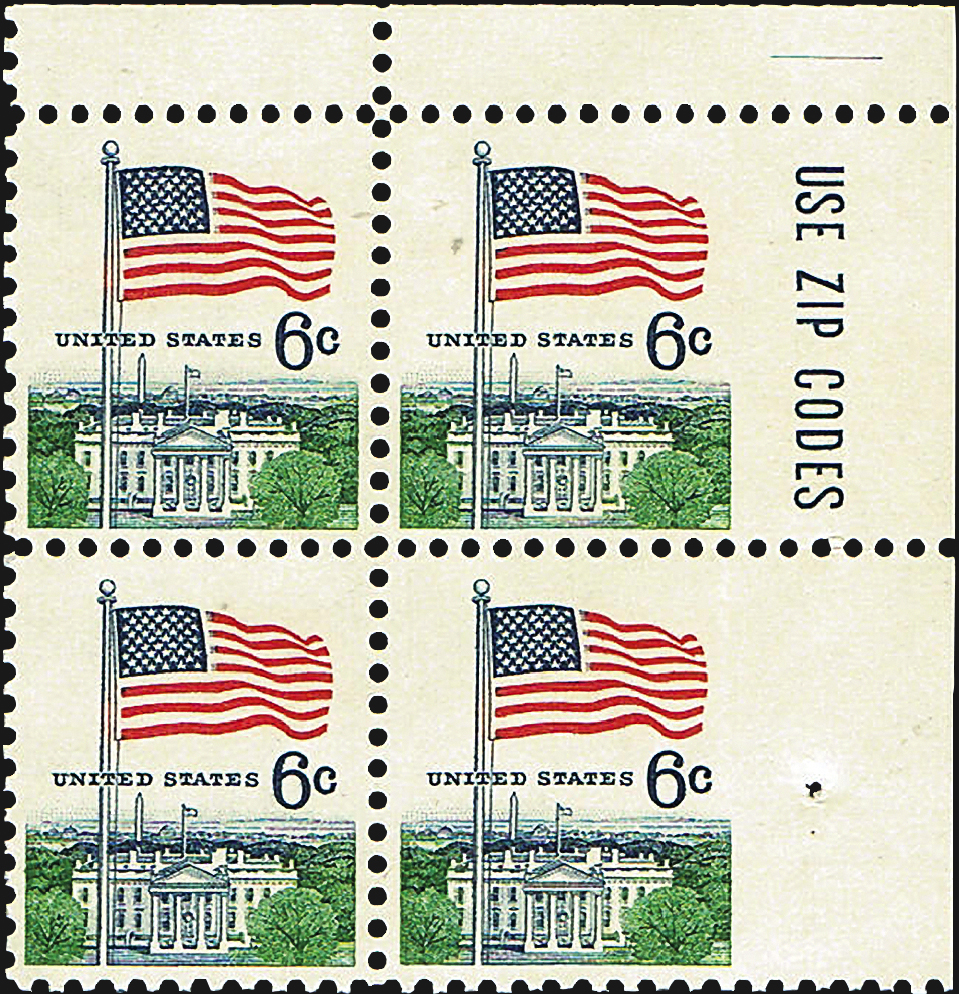 This 1968 6¢ Flag and White House stamp block of four appears to be imperforate between the stamps and the right margin, but it does not quite qualify because there are light perforating pin impressions just inside the design. 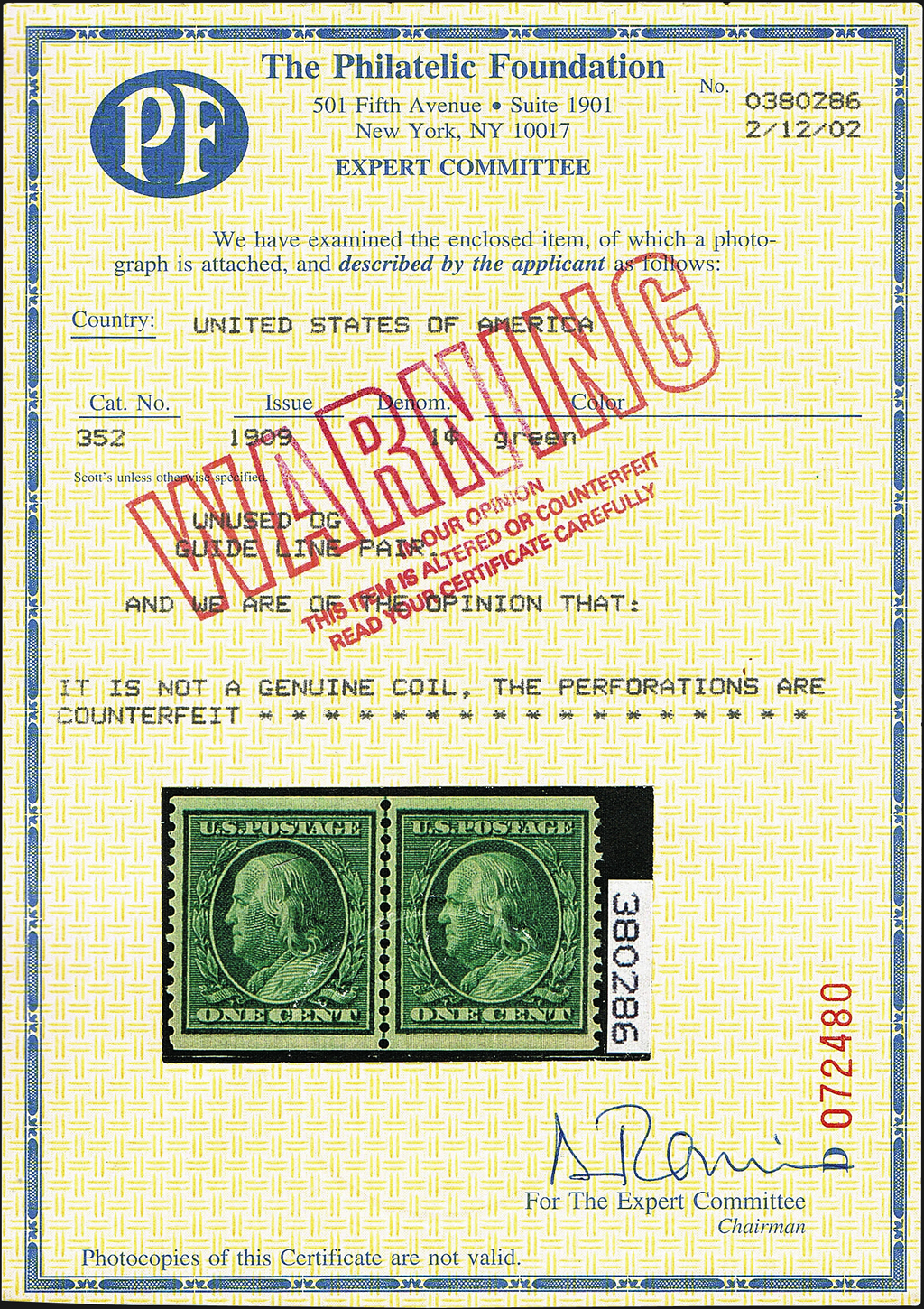 Beware stamp and cover offers that say the item is accompanied by a certificate. As in this case, the certificate may be negative. It’s best to verify that the offered item is genuine, and whether there are faults noted.
Previous
Next

In the previous column in this series on expertization (Linn’s July monthly), we looked at examples of when expertizing is needed.

There were three takeaways from that column: Expertizing is needed when a cover seems to be too good to be true, when an unlisted error is “discovered” for an old stamp, and when that stamp issue has a history of being subjected to a lot of fakery.

Underlying these reasons are two others: You don’t have the experience to authenticate a stamp or cover, which is true for the great majority of collectors; and you want a high degree of certainty that what you are buying or selling is genuine, keeping in mind that a certificate with something you are selling often increases its sale value well beyond what the certificate costs.

And speaking of cost, avoiding expertizing fees when expertizing is not essential is also a good strategy.

1. Invest in an inexpensive 30-power magnifier that includes a battery powered light source. If your favorite stamp dealer does not have these for sale, try philatelic supply firms that advertise in Linn’s. Sometimes these magnifiers also can be found at a photo supply store or a jeweler.

2. Utilize the knowledge available to you at your nearest stamp club, through dealers at a local stamp shows, or in societies of which you are a member.

Using a 30-power magnifier to compare a normal example of a stamp versus a candidate for expertizing will often reveal whether the candidate has a chance of passing muster.

For example, a missing color means just that: The totality of the color is not present. The same is true for missing perforations. When it comes to modern-era multicolor stamps, what at first glance looks like a missing color can be due to color misregistration, partial printing of a given color, or intentional or unintentional exposure to sunlight or chemicals.

Take a look at the 1959 $1 postage due pair (Scott J100) shown nearby. The right-hand stamp reads “ollar” rather than “Dollar”. But if you look at the stamp under 30-power magnification, you can see a few dots of black in the “D” position.

A similar example exists on the 1988 36¢ Igor Sikorsky airmail stamp (Scott C119), where his name, in red, seems to be missing, but under 30-power magnification some of the red dots can be seen that are not visible to the unaided eye.

Another example is frequently seen on the 1968 6¢ Flag and White House Giori-printed sheet stamp (Scott 1338), which is sometimes offered with imperforate right margins. In every example I have seen, under 30-power magnification, pin impressions can be seen from the back just inside the design.

Examining gum and perforation holes under 30-power magnification also can tell you a lot about whether those aspects of a stamp are genuine. Are the holes oblong or perfectly round? Is there gum that permeates the perf tips? Is the grain of the gum consistent and a match for normal gum?

The other resource that collectors sometimes overlook is our collector and dealer friends and associates who we see at stamp club meetings, shows and bourses, or know via mail and the Internet. These folks have decades of experience. Simply asking for their thoughts on a stamp or cover that you think might be a good find is worth your while.

While they might not be able to tell you for certain that an item is good, they often can tell if it is not. I have saved quite a few bucks using this method, thereby sending in for expertizing only those stamps that have a good chance of success.

SO WHAT DOES IT SAY?

A recent listing on an auction site raised a red flag that is worth a mention here. Believe it or not, a purported Scott C3a, the 1918 24¢ Jenny Invert airmail error, was listed for auction in a group of high-value stamps, with a note saying that they all have certificates. What the listing did not say is whether or not the certificates refer to the stamps as “Genuine” with no faults.

The 1909 1¢ green guide line pair (Scott 352) shown on page 89 could be listed as having a certificate — but leaving out the important detail that the certificate says the stamps are faked; something you might want to know, because the item if genuine catalogs for $1,500.

On lots like the one in which the Scott C3a is included, always look for a readable image of the certificate. If there is not one, use the feature that most such sites provide, which is to allow asking the poster to provide the wording on the certificate. That way you don’t get burned.

Yes, if you bid and got burned, this sort of problem probably gets fixed on the long term, or at minimum, the seller gets a bad reputation on the site. But you will have to jump through hoops to make those outcomes happen, and it all could be avoided by being careful on the front end.

Charles Verge of the Vincent Graves Greene Philatelic Research Foundation in Canada responded to my expertizing column in the April Linn’s monthly about providing more information on or with certificates. While the letter is too long to print in full, I would like to share the major points.

The foundation deals only with British North America, which includes U.S. stamps from the 19th century used in Canada. Further, its experienced members meet in person to discuss patients (items being expertized), and it is supported by an extensive library of monographs, periodicals, photographs, archives, private papers, a reference collection, and access to Canada Post and its archives.

Verge notes that “In certain cases, where the patient is very important and could change the known facts,” the VSC6000 supplements good old intensive research work.

He cited three cases from the Vincent Graves Greene Philatelic Research Foundation’s files in which the VSC6000 and/or research resulted in important new findings on patients, and extensive reports were provided to the submitter, and were published in scholarly literature.

Verge concludes with this thought: “I agree, for all the reasons John Hotchner suggests, with the principle that providing additional information to the submitter should be an exception not a rule. However, with more use of scientific tools and the reports provided to expert committee members, it’s becoming easier to share the information that underpins the expert committee’s decision.

“Our committee noticed, as we get more comfortable with the use of the VSC6000 and its applications, that we are sharing more information with the submitter either by providing them with the reports, photographs and/or covering letters that explain our decision. We also, in one case so far, where we gave a ‘no opinion’ decision, indicated to the submitter that we would take another look at the item if he did more research and we even suggested some leads he could follow.”

Any Linn’s reader who would like a full copy of the Verge letter may send me 10¢ in mint postage and a stamped addressed envelope, and I will provide it. The address is John Hotchner, Box 1125, Falls Church, VA 22041-0125.