Coil definitives from Sweden show new photographic portraits of the king and queen with their royal monograms in the background. 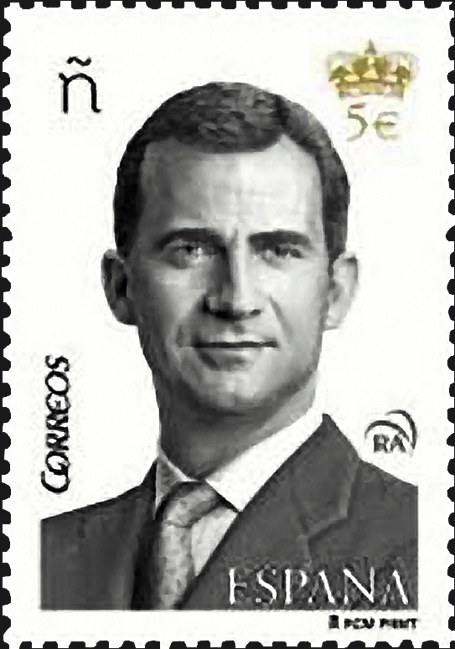 The €5 high-denomination stamp in Spain’s King Felipe VI set was printed by intaglio. It also includes a code that links to a video featuring the king. 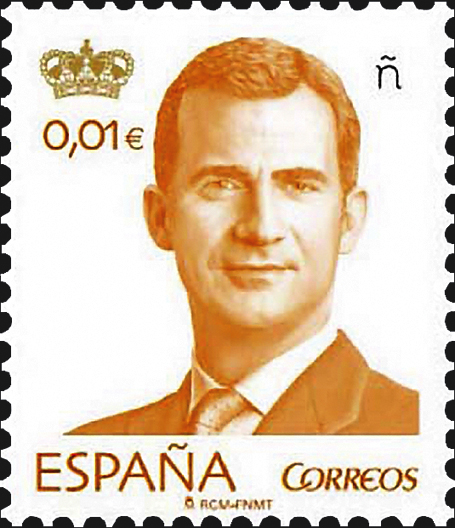 The Netherlands PostNL received complaints about the image of the crown on its first King Willem-Alexander stamps issued in 2014.

The Netherlands has redesigned its King Willem-Alexander definitives to make the crown more closely resemble the crown of the Netherlands. This stamp was issued March 2.

Three stamps from the Netherlands correct the image of the crown shown on stamps issued in 2014, the first definitives featuring King Willem-Alexander.

He was inaugurated as the king of the Netherlands April 30, 2013, after the abdication of his mother, Queen Beatrix, and the first definitives with his portrait were issued Jan. 2, 2014. An outline image of a crown in silver is included in the lower left of each of the three designs.

Three new definitives with the same portrait of the king, but a different crown, were issued this year: the nondenominated “1” domestic rate stamp for letters up to 20 grams on Jan. 5, and a nondenominated “2” stamp and an international-rate stamp on March 2.

In announcing the new stamps, PostNL said that the crown on the original stamps did not look like the actual crown of the Netherlands. People noticed and wrote to PostNL suggesting that a realistic image of the crown would be more appropriate. PostNL listened and made the change.

The crown is neither worn by the monarch nor used in a coronation ceremony.

An article in the April 30, 2013, issue of the English newspaper the Guardian is titled “12 things you never knew about the Dutch royal family.”

The fifth item on the list, contributed by Leo Benedictus, reads: “They don’t wear crowns. In fact they don’t even have a coronation. Willem-Alexander became king the moment his mother signed her abdication papers, and even at the formal inauguration ceremony, the crown, orb and sceptre were only displayed on a table.

“The crown itself, by the way, was made out of gold-plated silver in 1840, and uses fake pearls and jewels made from fish scales, glass and coloured foil.”

King Felipe VI succeeded to the Spanish throne June 19, 2014, upon the abdication of his father, King Juan Carlos.

Correos reported that the portrait was supplied by the king’s household.

The high denomination of the set, €5, was printed by intaglio (engraving), also in sheets of 50. This self-adhesive stamp includes an augmented reality (AR) code that links, through a smart phone, to a video about King Felipe VI.

Each design also includes a gold crown emblem in one upper corner and a black “ñ” representing the Brand Spain campaign in the other.

As reported in the June 9, 2014, issue of Linn’s, page 20, Brand Spain, or Marca Espana in Spanish is a state policy with the objective of improving Spain’s image, both at home and abroad.

King Carl XVI Gustaf of Sweden succeeded to the throne in September 1973, and definitives were issued the following year. Definitives picturing Queen Silvia were added in 1981.

Sweden periodically has updated the royal portraits on these stamps, with the last update in 2010.

Deciding it may be time for a change, the Swedish royal court was contacted and quickly answered yes to the idea of new stamp designs, according to Barbro Sjoberg, the stamp project manager for Sweden.

Designed by Daniel Bjugard, the new self-adhesive coil stamps show photographic portraits taken by Anna-Lena Ahlstrom. The king appears on the domestic-rate stamp inscribed “Brev,” and the queen on the 14-krona stamp.

Pictured in the background of each design is the appropriate royal monogram.

Karl-Erik Forsberg designed both the king’s and queen’s monograms.

Sjoberg reported that the monogram pattern in the background also serves as a security feature.

Postnord (the company established through the merger of Sweden’s Posten AB. and Denmark’s Post Danmark A/S) issued the stamps Jan. 15.