A question about cataloging booklet singles 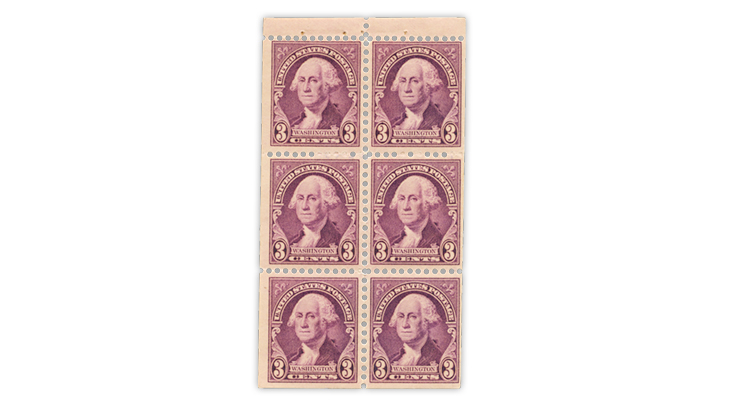 This 1932 3¢ Washington by Gilbert Stuart booklet pane of six includes four collectible varieties based on the location of imperf sides of the stamps. Should each variety have its own catalog number?

A Linn’s reader recently wrote to me, asking this question: “How do I catalog a booklet single by Scott number? Either discrete numbers don’t exist, or I don’t know where to find them.

“For example, basic U.S. Scott 720, the 3¢ Gilbert Stuart portrait of George Washington, comes in a sheet single (720), booklet pane (720b), and vertical and horizontal coils (721 and 722). The whole numbers are all cataloged as singles.

“But I have a booklet single, which I feel is a legitimate variety, but I don’t know how to inventory it since I do not believe it has its own Scott number (which I think it should.) How should I handle this?”

This is a problem as can be seen from the 3¢ Washington by Gilbert Stuart booklet pane of six (Scott 720b) shown here. There are in fact four different stamps in the pane: imperf right, imperf left, imperf left and bottom, and imperf right and bottom.

Should the editors of the Scott Specialized Catalogue of United States Stamps and Covers be expected to give a separate number to each of these varieties (which I agree are collectible as different stamps)? Given that they would have to do that for every U.S. booklet and every sheet stamp that has had straight edges, my thought is that collectors can recognize the differences without putting Scott to that trouble and further expanding an already heavy catalog.

Because collectors often prefer to acquire full booklet panes, and the producers of albums picture full panes, it seems that collectors who want to collect singles with these varieties are properly left to their own devices.

As one who has collected used singles with these varieties, I have either tried to reconstruct booklet panes or have simply hinged the stamps on blank pages after the printed page that pictures the entire pane.

As to description, I keep it simple. In the aforementioned example, I would just call them singles from Scott 720b.

And for purposes of inventory, each variety just needs a few descriptive words, or text that can be used to track back to the collector’s own identification system, such as perhaps 720b1, b2, b3 and b4 for the 3¢ Washington by Gilbert Stuart booklet stamps.

To me life is complicated enough without having to find ways to make it more so.