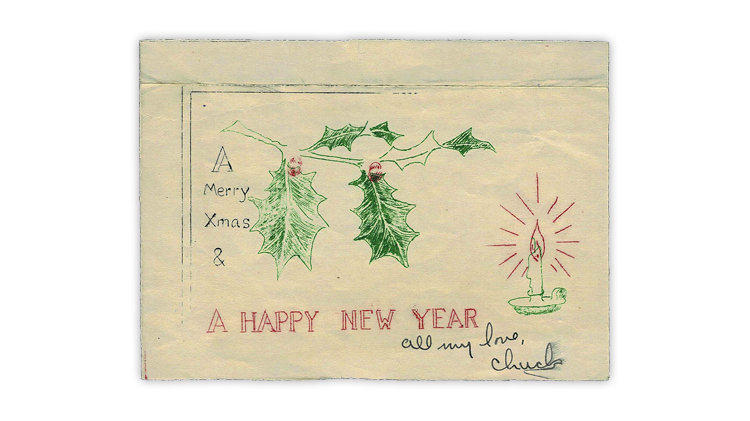 This rudimentary Christmas greeting card was printed in POW Camp 2, which housed officers. This one was sent by Army Lt. Charles Rundgren, who was a POW from Nov. 27, 1950, until September 1953. The armistice ending the war was signed July 27, 1953.

Possibly the last place one would expect to be visited by the ghosts of Christmas past, present and future is a Chinese-run prisoner-of-war camp on the Yalu River during the Korean War. But some resilient American soldiers — the survivors of death marches to the permanent camps located in North Korea just below the border with China — found a way to send a Christmas card home.

I have one of the five known examples in my collection of Korean War POW mail, and it is shown here.

To call the card homemade is generous. It was printed in POW Camp 2, which was established to house officers who were POWs. The story of how it was created would undoubtedly make fascinating reading, but it seems to be lost to history.

One reason so few of these greetings survive is that the amount of surviving POW mail is quite small. My latest estimate is in the range of 200 letters, which is not much for a POW population of the 7,140 souls that the Chinese acknowledged. Another 7,800 went missing in action, most of whom likely died in North Korean or Chinese custody.

The war began at 4 a.m. on June 25, 1950, when the North Korean People’s Army crossed the 38th parallel dividing North and South Korea.

To make a long story short, the North Korean army almost succeeded in overrunning South Korea, but the rapid infusion of American troops stationed in Japan, fighting under the United Nations flag, kept that from happening.

But not without considerable cost in lives lost and altered.

In the early days of the war, the North Korean army murdered most prisoners it took, not wanting to waste resources on their care and feeding. Later in 1950, China entered the war and took over the handling of POWs. The Chinese recognized the potential propaganda value of the prisoners and marched them to the permanent camps they had built in the far north of North Korea.

For those who made that trek, there was no means of escape. Not only did Westerners stand out among the native population, but the long distance to U.N. lines was prohibitive. And, approximately 40 percent of those captured did not survive.

United States Army Lt. Charles Rundgren, who sent the card shown here, was captured on Nov. 27, 1950. He survived almost three years as a POW before being released as part of ...

U.S. Christmas stamp to arrive Sept. 22 at Museum of Fine Arts in Boston