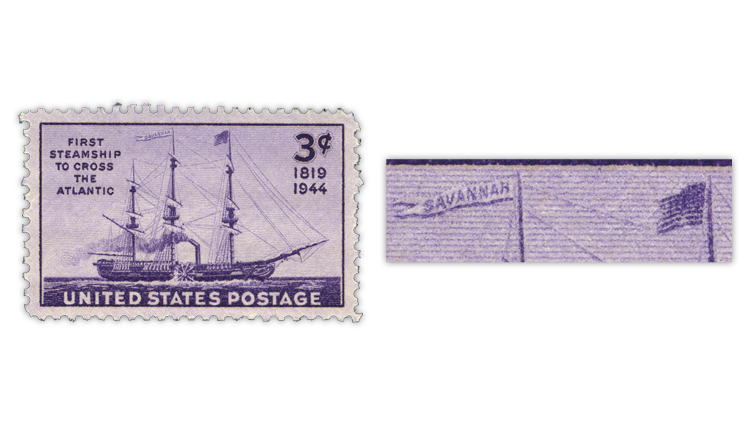 On this 1944 3¢ stamp featuring Savannah, the first steamship to cross the Atlantic Ocean (in 1819), the ship’s name appears in the pennant behind.

The first of several Linn’s readers to point out my mistake was Rick Howell of Bedford, Texas. He informed me that the ship’s name was indeed present on the stamp.

However, as shown in the image above, you need a magnifier to see it. The name Savannah is in the pennant flying just behind the American flag. I stand corrected.

I also heard from Art Cole, of the N.S. Savannah Chapter 119 of the Universal Ship Cancellation Society. Members of this chapter collect and study everything about the modern-day nuclear ship of the same name, but also have an interest in the 1944 stamp. The chapter recently published the 50th monthly issue of its newsletter.

If you have an interest in this aspect of U.S. philately, you can contact Cole by email at artcole@att.net.